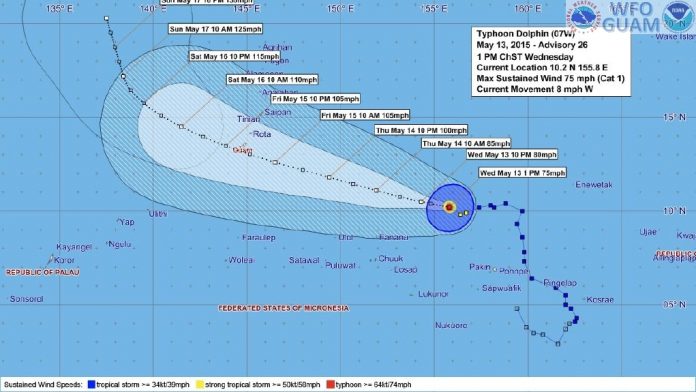 Guam – Tropical storm Dolphin is now officially a typhoon and Governor Calvo and Rear Admiral Bolivar have placed the island in condition of readiness three. NWS forecasters say there is a good chance for a direct hit which could bring Guam category two strength typhoon winds.

“We’re gonna expect a direct hit possibly over Guam on Friday,” said NWS forecaster Landon Aydlett. Aydlett tells PNC that typhoon Dolphin is on a track that will bring it through the Marianas with a very good chance of hitting Guam directly but this could all change. “We’re still looking at a time frame of Friday afternoon or Friday evening as a passage pretty close to Guam it could be just South of Guam to maybe as far North as the Rota channel that still changes every several hours with a new forecast track,” said Aydlett.

Different computer models show it doing different things. Some show it going as far North as Tinian while other models show it going South of Guam. The NWS takes all of these models and creates an average that gives them a forecast of the most likely track which right now brings it right near the tip of Southern Guam.

So in the least case scenario Guam will get tropical storm winds and in the worst case scenario we’ll see category two strength winds. “If we do take a direct hit with forecast winds of 105 miles per hour that would be category two,” said Aydlett adding, “There will be significant damage to weaker structures wooden frame buildings and stuff tin roofs they’ll peel back trees will take pretty heavy damage. Palm fronds, coconuts, it will be probably the heaviest damage we’ve seen in at least a decade.”

The typhoon force winds are close to the center so if the storm is North of Rota we would get tropical storm strength winds but if it passes near the Southern tip of Guam we would still feel typhoon strength winds. Either way Aydlett says to plan for the next category up which means plan for a category three to be safe. “Hope for the best plan for the worst,” said Aydlett.