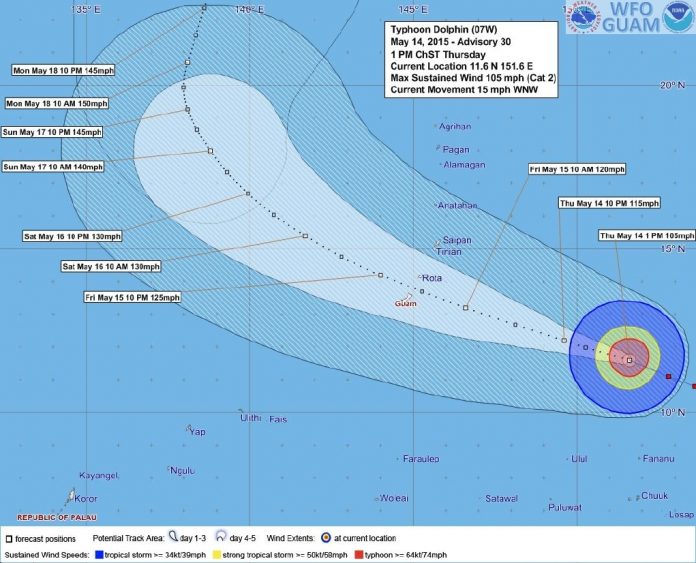 Still Expected to Pass Near Guam and Rota on Friday Afternoon

Guam – Typhoon Dolphin continues to make it’s way towards Guam and the Marianas but it is starting to track a bit north of Guam. This of course can all change. Meanwhile we are in typhoon condition of readiness 2.

Simpson says the latest track has typhoon Dolphin passing between Guam and Rota in the Rota channel. “There has been a tendency for it to lift a little bit North with time so the next twelve to twenty four hours are going to be critical for just figuring out exactly where it’s going to go through the Marianas,” said Simpson. However, Simpson points out that earlier in the week it was tracking well South of Guam. Then a couple days later it was directly over the Southern tip then at one point it was passing nearer to the center of the island and now it’s tracking North of Guam.

Maximum sustained winds for Dolphin are currently at 105 miles per hour but they are expected to be as strong as 120 miles per hour or greater once Dolphin gets to the Marianas.

“Once you get winds over 60 miles per hour you start causing damage. The roofs start getting blown away and there’s severe damage to trees, power lines and other structures. So anytime winds are over 60 mph your going to have some damage and when you get up around 100 miles per hour there’s going to be severe damage,” said Simpson.

If it continues on this track and goes between Guam and Rota, Guam will get mostly tropical storm strength winds which will begin picking up tomorrow morning.

“We’re looking at something like 4 o’clock in the afternoon is when the center of it will go by but of course much before then the winds are going to be increasing and rainfall will increase probably even during the morning hours people should expect some gusty winds and heavy rain even Friday morning,” said Simpson. If Dolphin passes directly over Guam we could get some typhoon strength winds as early as noon with the strongest winds coming around the later afternoon to evening hours.