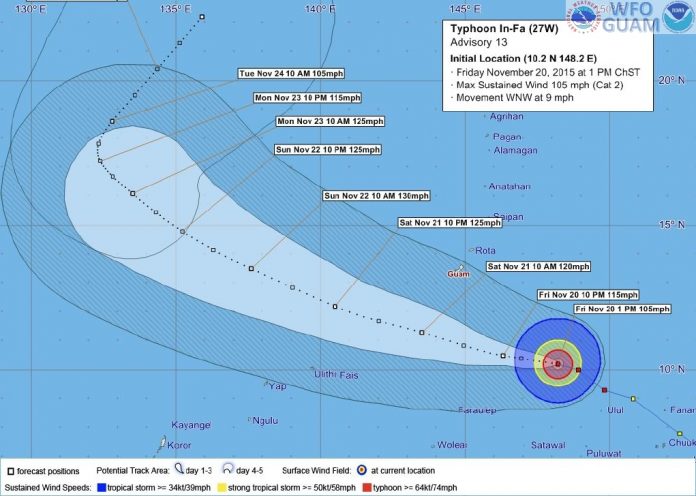 The island is still in COR2 and there is still a tropical storm warning which means Guam can expect the weaker tropical storm strength winds from the outskirts of the typhoon by early Saturday morning.

Guam – is in Condition of Readiness 2 in preparation for Typhoon In-Fa. The island is not expecting any typhoon strength winds we are however expecting some low end tropical storm winds.

Typhoon In-Fa is expected to pass South of Guam. National Weather Service Meteorologist Derrick Williams says the storm is intensifying and it’s expected to intensify further. “It has maximum sustained winds of 105 miles per hour and its intensifying pretty steadily right now it’s developed an eye in the last six hours its movement is still generally west-northwest at around ten miles per hour,” said Williams.

Although In-Fa is a typhoon the NWS is not expecting Guam to experience typhoon conditions. Instead they are expecting Guam to feel the most the outer edges of the system where the winds are much weaker. “On Guam you know we could see minimal tropical storm conditions,” said Williams.

There’s even a possibility that Guam could be spared these tropical storm winds. “The closest point would be about 140 miles. Now depending on the wind field and how it’s structured will determine if we receive the tropical storm force winds. Right now the extent of the tropical storm force winds are only 80 miles 80 to 90 miles North of the center so if you do the calculations it doesn’t quite reach Guam but this system is growing and it will grow over the next day or so and that’s what we’re keeping our eye on,” said Williams.

However Guam has been placed in a tropical storm warning as a precaution in case the typhoon wobbles a little further closer to the island and in case the typhoon grows significantly in size. “The highest wind speeds are gonna be across Southern Guam closer to the center with probably 30 to 40 miles per hour with gusts to 50 miles per hour. That’s considered minimal tropical storm strength,” said Williams.

Again, In-Fa is expected to maintain a West-Northwest movement taking it South of Guam Saturday morning.