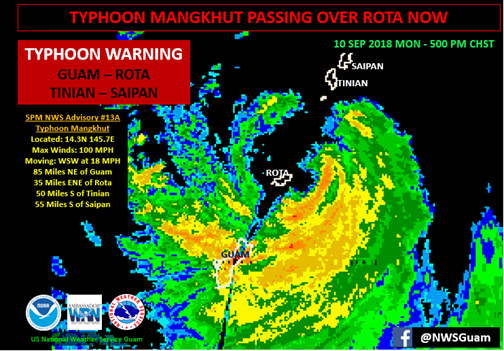 Guam – Typhoon Mangkut at its peak nearing the end of the 7 o’clock hour.

Typhoon Mangkut has been located 14.1N latitude and 145.0E longitude that is as of 7pm this evening. The eye of the storm is currently 15 miles west of Rota, 50 miles north northeast of Guam, 75 miles south south southwest of Tinian and 85 miles southwest of Saipan with maximum sustained of 105 mph continuing west at 265 degrees at 20 mph. It is expected to make a slight shift west-northwest with a decrease in forward speed over the next few days.

According to the National Weather Service, Typhoon Mangkut is over Rota at this very moment. We are currently experiencing the worst of Mangkut and residents of the entire Marianas are are urged to remain indoors throughout the night. We may expect Mangkut  to begin decreasing from its peak, by 10 pm tonight across the region starting from the northern-most island of Saipan, slowly making its way south along the Mariana Island chain. We can expect improved weather conditions by sunrise. However, we have been advised that seas and surf will remain “DANGEROUS” according to NWS.

Once damaging winds subside, residents are advised to continue to exercise caution as it may still be unsafe to traverse due to any debris, flooded roadways, downed power lines or any other damages that are harmful to life and property. Remain indoors until a Condition of Readiness (COR) 4 is initiated, for your safety as well as to allow emergency personnel to conduct their aftermath assessments.

The entire region remains under COR1 with the typhoon warning still in effect for Guam, Rota, Tinian and Saipan. COR1 means that destructive winds of 74 mph or more throughout the region. With Typhoon Mangkut over Rota, a Category 2 typhoon with winds of 104 mph or more remains possible, as the island is currently located in its eastern eye wall.

Stay updated on developments of Typhoon Manghkut with PNC News First, broadcasting LIVE on ABC7 and FOX6 as well as online on pacificnewscenter.com, Facebook and Instagram. LIVE hourly radio updates are also available on our sister stations News Talk K57, Power 98, KatFM and 99.5 The Shark.