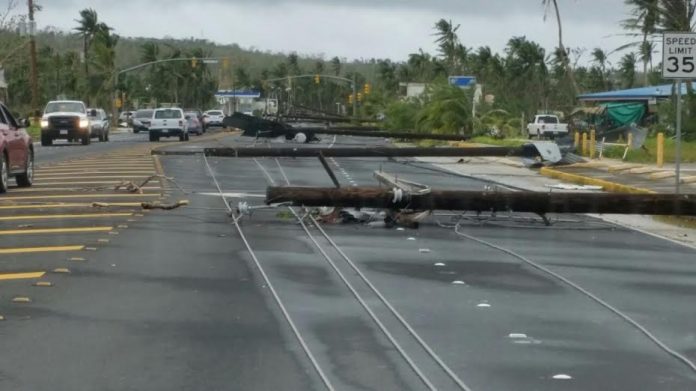 Commonwealth Utilities Corporation spokesman Brad Ruszala called into K57’s Breakfast show with Ray Gibson to describe the damage “I’ve been walking for the last mile and a half with my partner who’s actually driving. I’m photographing everything and it’s almost too much to take in…whew,” said Ruszala. The CUC Spokesman says that typhoon Soudelor flipped cars downed trees and power poles and damaged homes when it passed directly over the island at about 11pm Sunday night.

“A huge amount of our infrastructure is just gone,” said Ruszala. The CUC spokesman says numerous roadways are blocked and there is no telling when power and water will be turned back on. “All these power poles snapped in half fallen into buildings crossing over the road. We’ve also had some damage to our power plants. Now we haven’t been able to assess that completely yet now that that the lights starting to coming up we’re going to have a good opportunity to go through and check it out but right now we’re not gonna have power for some time,” said Ruszala.

National Weather Service Forecaster Mike Middlebrook tells PNC that Saipan was likely hit by winds in excess of 100 miles per hour however it’s not clear exactly how powerful the winds were because the wind measuring equipment called an anemometer broke. Before it broke the equipment recorded 91 mile per hour winds.

Ruszala says its been at least 15 years since Saipan has been hit from a typhoon like this. “A lot of people weren’t expecting it because we’ve been spoiled ever since the last 15 years we’ve been teased with typhoons that were just close or banana typhoons even the big ones didn’t come close enough to Saipan,” said Ruszala.

Meanwhile Governor Eddie Calvo and Lt. Governor Ray Tenorio have reached out to the CNMI to see what is needed. The Lt. Governor’s office is organizing a boot drive to raise funds for Saipan. The drive will be held on August 7th and the 14th at Guam’s major intersections from 4p.m. to 5:30p.m.