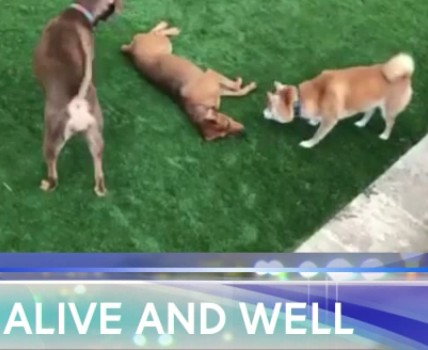 Tyson, the dog that was beaten up last Sunday, is alive and well under the care of a foster family.

Tyson, who was beaten by a man along the beachfront across the US District Court of Guam last Friday, seems to be doing just fine.

GAIN President, Cyrus Luhr says that although his mobility is a little shaky and he still has a long way to full recovery, he’s in good hands.

“Thankfully, he’s not completely blind. But there is concern that there might be levels of sight loss there. So again, that’s something we’re waiting for … for time to go by and be able to test his reactions and such. Thankfully he’s been getting excellent health care and right now, he’s been released from a clinic and he’s being taken care of in a medical foster care home. So at least he’s able to spend time with a family and just be in a more comfortable and safe environment instead of in the streets,” Luhr said.

According to Luhr, what they were told was that the person who was seen beating Tyson is known to GPD and has had numerous incidents of domestic violence that occurred in the homeless encampment.

He has been removed since the incident.

“This kind of highlights the connection with animal cruelty and other forms of violence. People that do this type of violence don’t just stop with animals. So this person has a violent and dangerous history, it’s believed, and it continued with this animal. So while GAIN focuses on the welfare aspect, we highlight this sort of case to the public because it’s absolutely critical that we hold people accountable for their violent actions,” Luhr said.

If found, the man would be charged with a 3rd-degree felony which will result in up to 3 years’ prison sentence in accordance with Guam’s current laws.

Pugua’s Law, which was named after the dog who was slain outside of his Yigo Family home, was passed by a 14-0 vote and the Governor has 30 days, up until possibly January 27, to approve and sign it into law.