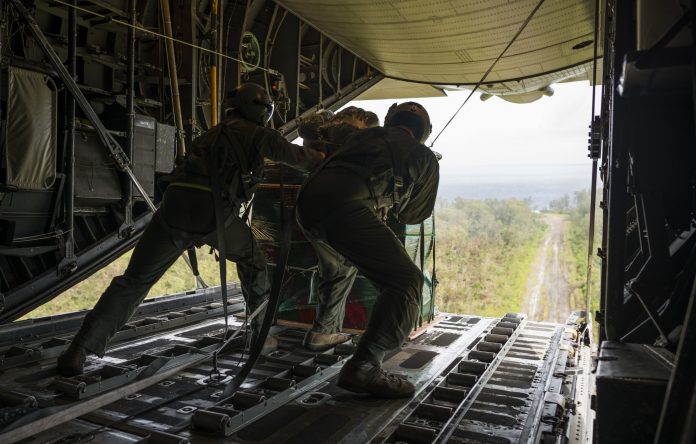 The U.S. Air Force will be playing Santa again this year with their 65th annual Christmas Drop. This year, they’re teaming up with the U.S. Navy to continue the long-running humanitarian mission.

Guam – It was 1952 when it all started: the crew of a WB-29 aircraft was flying over one of the islands in the Micronesia, when they noticed islanders waving to them. The crew gathered some items they had, put them on a parachute, and dropped them off to the islanders. And that was the beginning of Operation Christmas Drop. 2016 marks its 65th year, and the tradition has expanded to include donations from Guam residents and businesses. This also marks the first year of collaborations with the U.S. Navy and Naval Hospital.

MSgt. Henry Andino and Capt. Aaron Bowens spoke at the Rotary Club of Tumon Bay yesterday afternoon to promote Operation Christmas Drop, which has over 150 locations with donation boxes spread throughout the island, and where they’ll be welcoming donations all month.

Some day-to-day items that may be donated include:

The crew will begin packing the donations on Dec. 3, and the official push ceremony for the drop will be on Tuesday, Dec. 6 at Andersen Air Force Base. According to Capt. Bowens, Operation Christmas Drop will have “over 20 different flights that go from 7 different days. They’re called ‘Santa’ — we have Santa 14, Santa 15 — they go deliver various goods for 7 days to 56 different islands.”

For those who want to donate, Operation Christmas Drop will be taking donations until Wednesday, Nov. 30 to give humanitarian aid to 56 islands in the Micronesia.