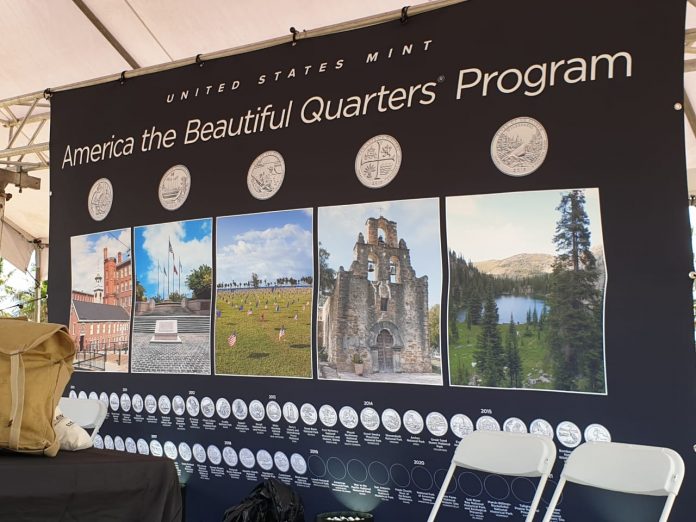 Guam – The United States Mint launched the America the Beautiful Quarters® Program coin honoring the War in the Pacific National Historical Park in Guam on Friday, May 3.

The reverse (tails) design honoring the site depicts American forces coming ashore at Asan Bay, strengthening the number of troops on the island in the fight for Guam and its eventual liberation. Inscriptions are “WAR IN THE PACIFIC,” “GUAM,” “2019,” and “E PLURIBUS UNUM.”

“The American Liberation of Guam hastened the end of the war, but came at a price of thousands of casualties. May this quarter stand as a tribute to the memories this park preserves,” said Director Ryder.

Leon Guerrero spoke on the momentous coin reveal, sharing with the public its significance to the island’s history.

“The event that happened right here in Asan where thousands of our soldiers came to liberate us from the Japanese atrocities of war. And it is so fitting because this year we are celebrating 75 years of our liberation and we continue to honor our soldiers, our veterans, our active duty armed forces members,” she said.

The U.S. Mint also honored the American Memorial Park in the Commonwealth of the Northern Mariana Islands (CNMI) with its own commemorative coin on Tuesday, April 30.

Having both of the national parks in the Mariana Islands for the program honors the bravery of all the people of the Mariana islands and the service members who fought to bring peace to these islands.

“To commemorate the bravery, courage, and sacrifice of those who participated in the Pacific Theater campaigns during WWII, is the coined purpose of the quarter,” according to a release out of the US Mint.

May 3, 2019 has now been declared Quarter Day in the classrooms by the Governor.

If you want to get your very own War in the Pacific National Historical Park Quarter, orders are being accepted at the Mint’s online catalog: https://catalog.usmint.gov/coin-programs/america-the-beautiful-quarters-program/ or at 1-800-USA-MINT (872-6468).