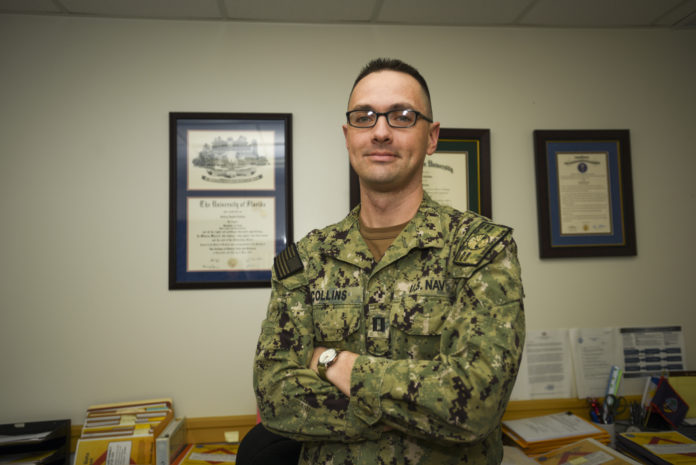 Collins is a graduate of the University of Florida where he received a
Bachelor of Arts in Political Science and went onto law school at George Mason University School of Law in Arlington, Virginia.

“Joining a JAG Corps immediately appealed to my desire to pursue public
service and the law. Attending law school near Washington D.C. was wonderful in that it afforded me the opportunity to interact with all of the service branches and discover which was the best fit for me,” Collins said.

“After completing an internship with the Navy JAG Corps at the Defense Service Office North at the Washington Navy Yard, I was hooked.”

As a child, Collins initially had aspirations of becoming an aerospace
engineer, but explained that after his first physics class in high school he
realized engineering was not his forte. He would eventually join his high
school debate team when he fell in love with public speaking.

“I always try to remember that my advice is just one data point amongst the
many that a commander considers on any given decision or issue,” Collins said.

“The law does not operate in a vacuum and neither do our commanders.
Remembering that the legal implications are only a small segment of the
overall picture that a commander, is considering is a humbling practice for a
profession that often sees itself as very absolute or black and white.”

In November 2019, Collins was also awarded the Navy Achievement Medal by Capt. Grimes.

“Lt. Collins is an exceptional Naval Officer in addition to being a truly
outstanding Judge Advocate General,” Grimes said. “The Navy, the Naval Base Guam community and I are fortunate to have him aboard.”

Collins has served as the SJA for NBG since May 2017.

“Being a part of NBG is the most rewarding part of my job,” Collins said. “No
two days at NBG are the same, which is part of what makes this job so
exciting. There is always a new issue walking in the door or a new project on
the horizon and as we all know the CO never sleeps! Capt. Grimes keeps the
pressure on all of us to strive for more than we thought was possible.”