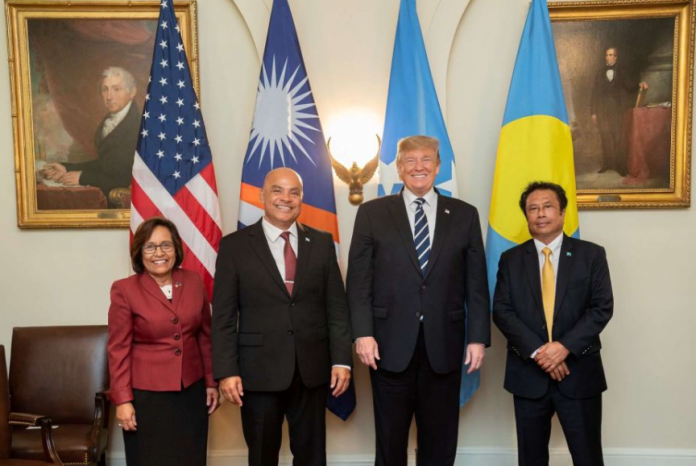 The President of the United States and the Presidents of the Freely Associated States issued a statement reaffirming a joint interest in a free, open, and prosperous Indo-Pacific region, and their commitment to the Compacts of Free Association.

Palau President Tommy E. Remengesau, Jr., Marshall Islands President Hilda C. Heine, and FSM President David W. Panuelo met with President Donald J. Trump on Tuesday at the Whitehouse. In their joint statement, they said, “Our nations believe in an economic development model that supports inclusive economic growth and an environment in which the autonomy of all nations is respected.

“It is in our mutual interest that the Pacific Ocean remains an important and vibrant corridor for maritime trade, and that we work together to reduce vulnerabilities to economic fluctuation and natural disasters. We seek to continue encouraging private-sector investment and trade between our countries and to strengthen the bonds between our peoples.”

Following the meeting with interior officials, the three presidents released individual statements focusing on an increased U.S. presence in the area, renewed COFA commitment, and increased participation and inclusion of FAS citizens as provided in the agreement.

Remengesau said they would welcome a “larger U.S. military and law enforcement presence in Palau where its citizens, including veterans, can take a greater role in the partnership.

“The Compacts of Free Association relationships that we share with the United States of America have been strong and mutually beneficial,” said Remengesau. “The Compacts have provided the backbone of U.S. military strategy in the Pacific for decades; our cherished sovereignty has enabled us to protect our cultures and resources for our people; at the United Nations, we have been one of the United States’ most consistent allies, voting in support of the values of free expression and the rule of law; many of our citizens are living productive lives in communities across the United States and its territories; and our young men and women also serve in the U.S. military, where some have even made the ultimate sacrifice alongside fellow Americans,”

Remengesau continued; “While we affirm this alliance, we want to ensure that it also adapts. We would welcome a larger U.S. military and law enforcement presence in Palau where our citizens, including veterans, can take a greater role in this partnership. The Compact will be more effective when we share the responsibilities.”

Heine said, “relationships and communities are only as strong as their people.”

“I have advocated for more inclusion, consideration, and participation of Pacific Island women and girls in political, communal, and economic decision-making for stronger island families and communities,” said Heine.

Heine continued, “Along this same vein, we would hope that the FAS families who choose to live and work in the United States, as provided for under the Compact, are not excluded or prohibited by recent laws such as the REAL ID Act, preventing them from contributing fully within their respective communities. Likewise, Marshallese citizens who serve in the U.S. Armed Forces and obtain valuable skills and experience should not be discouraged from returning to the Marshall Islands, due to a lack of benefits and services available there”

“We also look forward to continuing our work with the U.S. Administration to improve the viability and sustainability of our Compact Trust Fund with additional investments so that it can achieve its intended purposes. This will be of great benefit to both nations in the future. Our people and our islands are highly vulnerable to climate-related risks and natural disasters – we appreciate that President Trump has been very proactive about issuing disaster declarations for our region and look forward to the relationship between our people continuing in strength, peace, and prosperity, both here in the United States and in the Marshall Islands,” Heine concluded.

Panuelo said, “We are encouraged by the U.S. commitment to increase its presence in the region, which is crucial to regional and international peace and security. Our relationship with the United States under the Compact of Free Association is unique. President Trump recently signed the Executive Order on Economic Empowerment of Asian Americans and Pacific Islanders, and we thank him for this unprecedented initiative.”

Panuelo continued. “As we work with both the Department of State and the Department of the Interior, as well as Members of the U.S. Congress on matters relating to the Compact, the FSM will be requesting an extension of the expiring provisions of the Amended Compact.”