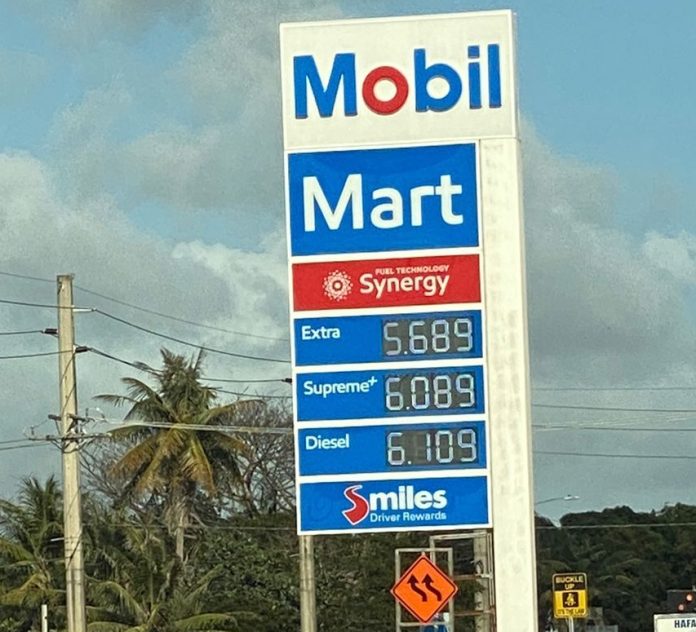 Gas prices in Guam and across the U.S. continue to soar due in part to the Russia-Ukraine conflict. White House Press Secretary Jen Psaki addressed the rising gas price issue in a press briefing today.

Devin Eligio has the story

Gas station signs on the island read prices as high as $5.69. Guam’s neighboring islands such as Tinian and Rota have reached over $7 for a gallon.

Although the U.S. has placed sanctions to stop imports from Russia in an attempt to cripple their economy, European nations are affected the most by the ceasing of oil imports.

According to officials from the Biden Administration, the immediate discussions over Russian energy are focused on banning domestic oil imports rather than carrying out wider sanctions that would cut off purchases by other countries.

Members of the press brought forth comments from ordinary citizens about the current gas prices in the U.S. Some of the citizens said, “I just never imagined the gas prices being this high” or “It’s a huge stressor to my financial situation.”

With programs such as Prugraman Salappe, a local disaster relief program in place to alleviate the rising costs for gas on a smaller scale, assurances from the White House entail more work to be done globally to alleviate the inflation.

Psaki said the U.S has produced more oil in the past year than President Trump’s first year with 9,000 unused approved permits to drill.

According to the U.S. Energy Information Administration, as of 2020, the United States produces 18.61 million barrels a day accounting for a 20% share of the world’s total.

Psaki rounded off the discussion of energy use in relation to the effect on gas prices by emphasizing a more sustainable source of energy.