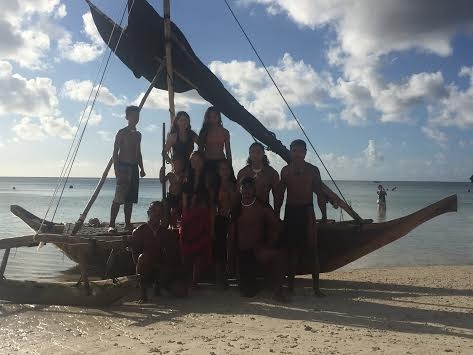 The Ulitao traditional CHamoru seafaring has been building and sailing traditional canoes since 2012 with almost no monetary support.

Guam – Ulitao founder Ron Acfalle says they began building and sailing traditional canoes years before FESTPAC began and they will continue to sail well after FESTPAC. With the right support he believes they can sail to Hawaii for the next FESTPAC four years from now.

“In CHamoru Ulitao is the definition or name of the canoe house or men’s house and that’s where the men learn everything from tradition to traditional carving to navigation to just about everything before they become a man. That’s why we named it Ulitao because it’s about the younger generation it’s for them that we want to try to teach whatever knowledge we have,” said Acfalle.

Acfalle started the Ulitao traditional CHamoru seafaring group in 2012. Since then they’ve been building traditional canoes and have been sailing them with almost no monetary support except for some sponsorship by the Proa Restaurant which get’s it namesake from the CHamoru flying proa which is what Europeans called the CHamoru canoes.

“Ron has built these canoes with minimal investment I think it’s a lot of elbow grease and a lot of time that he’s done on his own. I mean proa has helped with minimal investment but with critical parts like the sail we purchased the sail we purchased some materials to help them put these canoes together the sayans,” said Proa owner and Ulitao seafarer Chris Bejado.

And now they have three canoes all carved and built on Guam. The 33 foot Ulitao, the 25 ft Aguaguat and the 18ft Mahetok. Jowinalyn Mendiola sails with her husband and son. She explains what seafaring has taught her and her family. “It taught us to feel the wind it taught us to be one with the ocean how to ride the waves how to switch sails when the wind all of a sudden changes on you how to communicate how to listen to each other to be open minded not to fight each other communication number one is the key,” said Mendiola.

Acfalle says FESTPAC was an amazing touching even spiritual experience but just because FESTPAC’s over his group is not going to stop.

“Our drive is to keep going forward and hopefully we’ll be able to have larger canoes so that we can sail to Hawaii for the FESTPAC and represent our people so FESTPAC 2020 is our goal now,” said Acfalle.

Right now it’s a labor of love for Acfalle and his crew as they have been doing this on their own free time while trying to feed their families. Acfalle says they need funding to help them keep their seafaring group growing.

The Ulitao seafarers need support with funding things like chase boats to provide escorts to farther places like Rota and Saipan as well as funding to allow them to pay their crew stipends for the time spent building and sailing the canoes. To find out how you can help them out you can contact them on their facebook/ulitao.