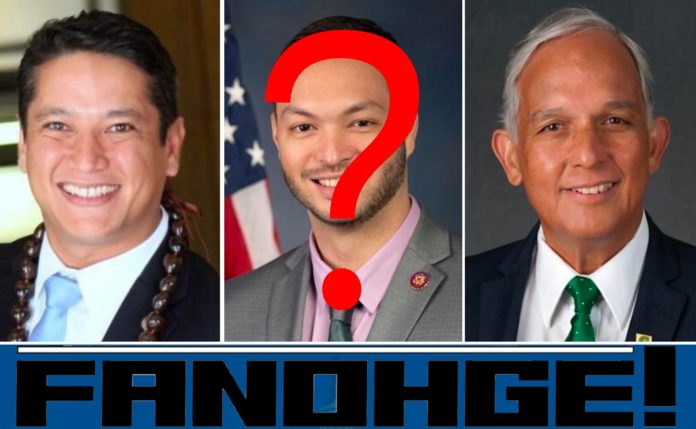 The congressional candidates “debate” organized by the Fanohge coalition took place as scheduled Wednesday morning, but only two of the candidates participated — Dr. Robert Underwood and Sen. Wil Castro.

According to Michael Lujan Bevacqua, who moderated the event, incumbent Guam Delegate Michael San Nicolas informed them that he wouldn’t be able to make it due to a prior appointment.

The “debate” was not really a traditional debate wherein the participants would interrogate each other. Rather, the participants were asked about their views on self-determination and political status for Guam.

Underwood began by saying that he’s for Chamorro self-determination and has always been since the very beginning.

“There’s two dimensions to this for me. One is there’s a legal dimension … and that is that legally, the people have the right to determine their future and this was granted through a series of laws and primarily by the Treaty of Paris. And in a sense, the Organic Act also acknowledged that it is the Chamorro people for whom the political status of Guam is really attached to,” Underwood said.

“And you can see that moral obligation when people start talking about their status as an indigenous people and their status as a colonized people. Moral obligation is also a key driving force. So there’s two dimensions to Chamorro self-determination. There’s the moral imperative. And then there’s the legal standing issue … and how that is defined or accepted or refined by each individual human being — by each Chamorro and non-Chamorro on Guam — is vitally important, for understanding the history of Guam,” Underwood said.

The former congressman also stressed that the primary obligation of the Guam delegate is to tell the Guam story. “You have to present the Guam story in a compelling way that speaks to a national purpose and a national obligation. The United States is going through a serious self-reflection … We will see dramatic changes … in how we deal with social injustice … A delegate who understands that and who is willing to put Guam’s case into the middle of that mix and advocate forcefully and clearly … I believe we’re going to see some important changes in national policy,” Underwood said.

“Our congressional delegate should be capable of talking to the people. There is a need to have somebody who is capable of building bridges and who is committed to remain active and engaged,” Castro said.

For Castro, decolonization means reaching the highest level of self-determination.

‘As a matter of fact, to me, political self-determination can actually go right into full inclusion into the union of states. You know, I’m not advocating for my private preference, but I will fully disclose that I’m for statehood, that I do think that there are certain opportunities that we can gain from this. In my opinion, decolonization is reaching the highest level of political maturity to determine for yourself how you want to proceed without the influence of any administering authority,” Castro said.

The senator also said it’s important to underscore that the lack of Chamorro self-determination is a historical injustice that goes back hundreds of years.

“And this is why I have so much faith in the US Congress and the next delegate whoever you choose. Because I do believe that if the United States is going to be this great beacon of American progressive democracy, that in fact, they will — and we will help convince them — that in fact as a beacon of hope and light, this historical justice must be redressed,” Castro said.