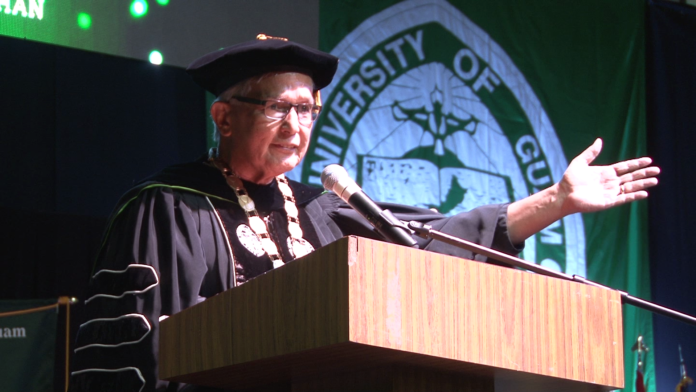 Guam – It was a historical graduation ceremony at the University of Guam yesterday. Not only was it UOG President Dr. Robert Underwood’s last commencement address as he prepares to retire but, as he so poignantly announced, “they’re the largest class!”

Indeed, the university held its Fañomnåkan Commencement Ceremony as 319 graduates walked across the stage to receive their diplomas. Of the degrees conferred, 273 were undergraduate degrees while 46 were graduate degrees.

This was also a crowning moment for Dr. Underwood as it marks his last address as president. Throughout his career at UOG, he’s presided over 21 commencement exercises and has signed over 7,000 diplomas.

“If I can issue press releases every hour, type fast on my cell phone, I can get many of you to believe that a deficit is surplus, that borrowing is income, and that a pothole is a smooth road under repair,” said the outgoing president to the cheers and laughter of the crowd. “There’s a lot to correct, there’s a lot of work ahead for all of us. You are armed with a diploma from this institution and expected, and I would say commanded, to engage the problems of the world and solve them in the best way you know how through healthcare, through opening a business, through inspiring young people in a classroom, through social activism, through political action, through community engagement, by getting your hands dirty with the soil of the island.

We’d also like to recognize one of our own, Joycelynn Atalig, our weather reporter graduated from UOG Sunday as well with a bachelor’s degree in political science.

Read the release from UOG below:

The University of Guam celebrated the accomplishments of 319 graduates during the first official Fañomnåkan Commencement Ceremony held at the UOG Calvo Field House this afternoon. UOG officially renamed the Spring semester to Fañomnåkan last year.

The Diploma as a “Fisga”

Outgoing University of Guam President Robert Underwood was the Commencement Speaker.  He talked about the importance of the next ten years and the responsibility of the graduates to “engage the problems of the world world and solve them in the best way you know how—through health care, through opening a business, through inspiring young people in a classroom, through social activism, through political action, through community engagement, by getting your hands dirty with the soil of the islands or your hair wet with the waters that surround us, through hard work, through recognition that the truth is the truth and it will always set us free or at the very least start us on the right path.”

Underwood also showed a fisga he received as a gift earlier this month and likened it unto the diplomas earned this afternoon.  Below is an excerpt from his remarks:

This is the fisga—sort of like the Trident that is carried by the Triton—it is the CHamoru version. It is my gift from a wonderful academic companion during the past five years, the office of the Senior Vice President led by Dr. Anita Borja Enriquez.

This is the tool that symbolizes what a diploma from the University of Guam should mean. It is my weapon to protect the island, the water, the reef against all threats. I will use it only as necessary but I will not hesitate to use it when I have to.

This is tool that I can use to secure my next meal, in fishing the waters, in providing for myself and others in order to sustain life and sustain a way of life in the process. It is my tool for survival.

This is the tool that reflects my respect for my past as I dream about and create a future. It tells me that the future of any island society as unique as Guahan must be built on its traditions, not trample them, must respect the people who made the name Guahan, Mangilao, Inafa’maolek, Fanuchanan, Fañomnåkan possible not dishonor or ignore them.

The is the tool that represents the dignity of who we are as islanders, as Tritons, as proud graduates of the University of Guam. We use it to stand guard, to preside, to represent, to remind us of the principles of respect, love and responsibility.

Class valedictorian Alicia Mai Perrin, who graduated with a Bachelor of Arts in Education talked to her fellow graduates about her personal fears, nerves, and insecurities during her years at UOG. She assured the crowd that their abilities to work through these challenges led to progress and their graduation from UOG and that remembering that perseverance will allow them to manage any unknown obstacles in life or career. “As long as you face your challenges and fears with the same spirit you used to obtain your degree, nothing can stop you. I can only hope you hang on to that spirit tightly,” she said.

The ceremony was streamed live and can be viewed on the official UOG Facebook page.