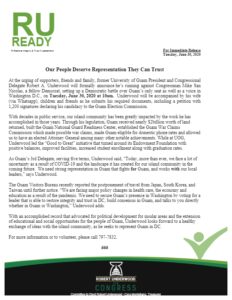 Dr. Robert Underwood will formally declare his candidacy for Guam delegate Tuesday morning at 10 a.m. at the Guam Election Commission.

He showed his hand over the weekend, posting a campaign flyer on his FaceBook page announcing his intention to challenge incumbent delegate Michael San Nicolas in the August 29th primary for the Democratic nomination for Guam’s delegate to the U.S. House of Representatives.

In a news release Monday evening, he acknowledged that his entry into the race will set “up a Democratic battle over Guam’s only seat” in Washington D.C.

He explained that he is entering the race “at the urging of supporters, friends, and family.”

In his release, Underwood cited the five terms he has already served in Congress from 1993 to 2003.

“Today, more than ever,” he declared,”we face a lot of uncertainty as a result of COVID-19 and the landscape it has created for our island community in the coming future.”

“We need strong representation in Guam that fights for Guam and works with our local
leaders,” said Underwood.

READ the release from Dr. Underwood in FULL below:

Our People Deserve Representation They Can Trust

At the urging of supporters, friends, and family, former University of Guam President and Congressional Delegate Robert A. Underwood will formally announce he’s running against Congressman Mike San Nicolas, a fellow Democrat, setting up a Democratic battle over Guam’s only seat as well as a voice in Washington D.C., on Tuesday, June 30, 2020, at 10 am. Underwood will be accompanied by his wife (via Whatsapp), children, and friends as he submits his required documents, including a petition with 1,200 signatures declaring his candidacy to the Guam Election Commission.

With decades in public service, our island community has been greatly impacted by the work he has accomplished in those years. Through his legislation, Guam received nearly $2-billion worth of land returned, built the Guam National Guard Readiness Center, established the Guam War Claims Commission which made possible war claims, made Guam eligible for domestic phone rates and allowed us to have an elected Attorney General among many other notable achievements.

While at UOG, Underwood led the “Good to Great” initiative that turned around its Endowment Foundation with positive balances, improved facilities, increased student enrollment along with graduation rates.

As Guam’s 3rd Delegate, serving five terms, Underwood said, “Today, more than ever, we face a lot of uncertainty as a result of COVID-19 and the landscape it has created for our island community in the coming future. We need strong representation in Guam that fights for Guam and works with our local leaders,” says Underwood.

The Guam Visitors Bureau recently reported the postponement of travel from Japan, South Korea, and Taiwan until further notice.

“We are facing major policy changes in health care, the economy, and education as a result of the pandemic. We need to secure Guam’s presence in Washington by voting for a
leader that is able to restore integrity and trust in DC, build consensus in Guam, and talks to you directly whether in Guam or Washington,” Underwood adds.

With an accomplished record that advocated for political development for insular areas and the extension of educational and social opportunities for the people of Guam, Underwood looks forward to a healthy exchange of ideas with the island community, as he seeks to represent Guam in DC.