Students were tasked with writing an essay about a Guam hero who has made a positive impact in their lives.

The Guam hero selected in the high school category is Rayn San Nicolas, a 14-year-old-boy who drowned while saving the life of his cousin. Another of Rayn’s cousins, Natalie Bejado, a senior at Academy of Our Lady of Guam, wrote about his courageous efforts as he put the life of another before his own.

The Guam hero selected in the college category is Rosita Tropia, a vegetable stand owner in Dedeo who takes people into her home during times of hardship. University of Guam junior Katrina Palanca wrote about how Ms. Tropia makes sacrifices in her own life to help others in need.

The Guam hero selected in the middle school category is Joshua Taylor, a teacher at Harvest Christian Academy. 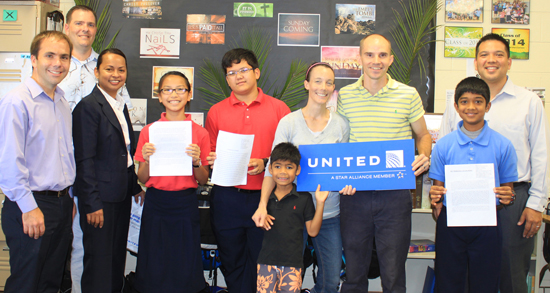 “United celebrates these special people who have made a difference on Guam,” said Quentin Koch, United’s Director of Sales for Micronesia. “The amount of entries illustrates that Guam is full of people who go out of their way to mentor our youth, and we are proud to be a part of such a wonderful community.”

The overall winning entry will be on display at United’s City Ticket Office in Tamuning, located in the Century Plaza Building at 219 South Marine Corps Drive, Suite 102. The office is open Monday to Friday from 10am to 6pm and Saturday 10am to 5pm.

About United
United Airlines and United Express operate an average of 5,472 flights a day to 381 airports across six continents. In 2012, United and United Express carried more passenger traffic than any other airline in the world and operated nearly two million flights carrying 140 million customers.