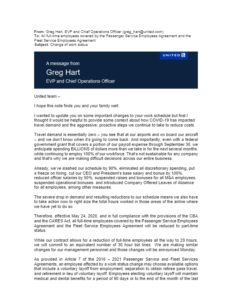 United Airlines plans to cut the hours of 15,000 airport workers reducing them to part time employees in the face of a dramatic decline in demand for flight service amidst the coronavirus pandemic.

The Chicago Tribune reports that full-time baggage handlers, customer service agents and reservations agents will have their hours cut from 40 hours to 30 hours a week starting May 24.

Greg Hart, United’s executive vice president and chief operations officer sent a letter to all of United’s employees on Friday, May 1st.

It’s not known how many United employee on Guam will be affected. In a statement United said it “will not provide a breakdown by location.”

The International Association of Machinists and Aerospace Workers issued a statement calling the action “cruel and selfish” and “quite possibly illegal. ”

United has received $5 billion in financial assistance under the CARES Act to keep workers on the payroll.