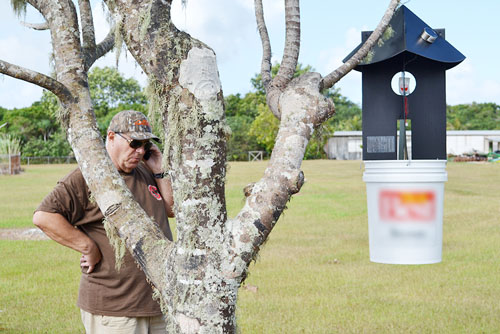 Guam –  The Japanese proverb, “None of us is as smart as all of us,” certainly applies to the difficulties of controlling invasive species introduced to island ecosystems that have developed in isolation.

A rhino beetle infestation has been found on the island of Oahu on a golf course next to the runway on the Hickham Air Force Base. University of Guam researchers Dr. Aubrey Moore and Roland Quitugua were invited to Hawaii as Subject Matter Experts (SME) and were able to offer valuable information on how to identify and eradicate coconut rhinoceros beetle (CRB) breeding sites. Hawaii is benefiting from technology developed on Guam by Moore and Quitugua in collaboration with Dr. Matt Siderhurst and Dr. Eric Jang at the U.S. Department of Agriculture (USDA) Pacific Basin Agricultural Research Center in Hilo, Hawaii.

Moore and Quitugua spent a week on Oahu at the request of the USDA to assist in planning an attempt to eradicate the rhino beetle population before it can spread from Hickam Air Force Base to other parts of the island. They trained Hawaii Department of Agriculture, USDA personnel and 30 stakeholders from the public & private sectors on how to identify CRB damage on palms trees and how to find CRB breeding sites. They also helped to develop protocol procedures for CRB eradication.

It is interesting to note that Hawaii Department of Agriculture, Plant Industry, Quarantine Branch officer Wilfred Leon Guerrero, whose father is a past president of UOG, discovered the first CRB breeding site found in Hawaii. He learned about the rhino beetle on a recent visit to Guam and recognized signs of infestation.