Guam – Two brothers and their step-father have been arrested and charged with separate burglaries and a car theft after police traced an unfamiliar cell phone number found on the cordless phone in the home of one of the robbery victims.

The first arrest was made last week, Joshua John Pangelinan Tedtaotao was charged with burglary.

According to the magistrate’s complaint against him, Joshua was arrested Thursday, February 13th,  following a foot chase and search, during which Joshua decided to give-up by calling an officer known to him, and asking that offcier to come and pick him up at Danny’s Goodtime Lounge in Mangilao.

During his interrogation, Joshua was asked about the robbery of the Bank of Guam. The Magistrate report does not reveal what, if anything, was learned about that armed robbery. But it does reveal details about 3 burglaries which, according to the complaint, Joshua admitted to.

Joshua was also asked about a February 4th burglary and, according to the Magistrate report, he admitted that his brother, Jathan Tedtaotao, and Antonio “Ton” Quitugua of Yigo, stole 6 firearms, and 200 rounds of ammunition from a Yigo home on that date.

Police knew to ask Joshua about the case, because they had managed to trace an unknown cell phone number found on the cordless home of  the victim whose guns and amo were stolen.

The weapons and ammunition were locked inside a cabinet secured by a deadbolt. The cabinet was located inside a hallway closet. The burglars broke the deadbolt to get into the cabinet and steal the guns and bullets.

The phone number was issued by Docomo Pacific and after obtaining a warrant, GPD learned from Docomo records that the number was linked to a prepaid phone and there was no subscriber information. But police did notice other calls and text messages on the phone number record. Some of those calls and text message were made to a female minor in Yigo who was already known to police. The female minor is identified in the Magistrate report as SE.

Police met up with SE on February 10th when they went to a residence in Mataguac Yigo to investigate a separate incident involving the theft of a vehicle. SE was there and investigators her if she knew the person who had texted and called her from cell phone number “685-6041”.

She said it was her brother, Jathan Pangelinan Tedtaotao.  Jathan was eventually arrested last Friday, on February 15th. 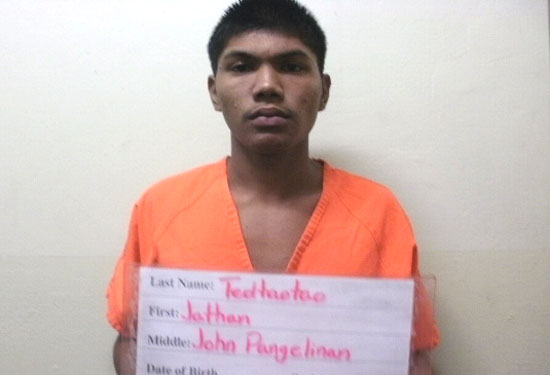 Jathan’s Magistrate complaint reveals, the his brother, Joshua, had implicated him [Jathan] in the February 4th theft of guns and ammo from the Yigo home. And Joshua explained to police how his brother Jathan’s cell phone number ended up on the victim’s cordless phone.

Joshua said he dropped Jathan and Ton off at the residence, and he drove around the block, returning to the home to pick them up after the robbery. But Jathan came out of the residence and told him that he had lost his cell  phone (“685-6041”) inside the home.

Joshua went inside the home, dialed his brother’s cell phone number on the cordless phone and heard the ringing coming from the couch. His Jathan’s cell phone had slipped and fallen between the couch cushions.

The Magistrate report says that Joshua told police they had “stolen six firearms from the residence. Ton took the firearms and he (Joshua) was later informed by Ton that he (Ton) gave two (2) of the firearms (shotgun and unknown rifle) to Vincente “Tente” Santos (hereinafter refer to as “Tente”) as a payment for unknown things that he (Ton) owed Tente. The other four (4) remaining firearms still being kept by Ton at his residence in the ceiling.”

Vincent David “Tente” Santos is the step-father of Joshua and Jathan. 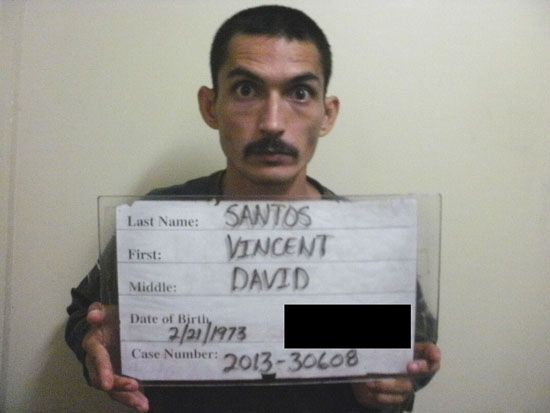 Santos was arrested for theft of a motor vehicle, based upon statements made by his step-son Joshua.

According to the Magistrate report for Santos, during Joshua’s earlier interrogation, he [Joshua] was also asked about the February 7th theft of a black 2004 Toyota Tacoma pickup truck from the GMH parking lot.

Joshua told police that “he did not actually steal the truck”,  but “he was present when his step-father … Vincent Santos (aka “Tente”) … stole the truck.”

READ the Magistrate report HERE (second one down)

In addition, the complaint against Santos notes the following exchange between police and Santos as he was being escorted into the DOC prison in Mangilao.

Santos asked what he was being arrested for.

“He was told, once again, that he was arrested for Theft of a Motor Vehicle.”

The arresting officer then stated “‘Well for now, this is your home.'”

Santos responded “‘Oh yeah? This home is what made me know how to beat  fu***rs  like you!'”

“Defendant was confined at DOC Mangilao without further incident.”