And by 9:08, Guam Department of Education Public Information Officer Isa Baza notified news media that GPD had just been notified about the two bullets discovered at Untalan Middle School.

PNC arrived at the scene shortly after nine this morning but saw no police vehicles on campus. GDOE’s obligation to student safety entails that the school system notify the Guam Police Department, but it’s up to GPD whether to respond on site. 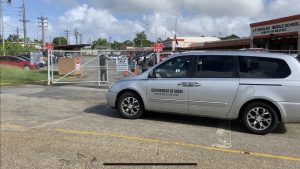 Before the shelter-in place was lifted, a school administrator walked out to personally escort a student being dropped off by the driver of this gray Government of Guam vehicle, marked “for official use only.”

While the parking lot gates were locked and cars were lined up to enter the school, it appeared an exception was made for one family.

Out of an abundance of caution, Barrigada Mayor June Blas and Vice Mayor Jesse Bautista showed up on location for the sake of the children’s safety.

PNC’s interview with the Mayor was interrupted just as soon as it began when a school security guard shouted at PNC to stop and to tell us we were not authorized to video-capture the campus. PNC was stationed outside the school with the Mayor on a sidewalk adjacent to, but not on, the campus.

By 9:25, police still had not shown up, and the “all clear” was given. According to Baza, the school conducted a bag search and the bullets’ discovery is still under investigation.

Baza cited the investigation as the reason for not elaborating on the condition of the ammunition, whether the bullets were intact or spent casings.

Superintendent Jon Fernandez assured PNC that news organizations have every right to capture images from the sidewalk and tells us he’ll be reviewing the “after action” report to help ensure student safety.

Pacific News Center asked police whether they visited the school at anytime today. According to SGT Paul Tapao of the Guam Police Dept, “GPD was informed that school officials used the risk-assessment-matrix and informed GPD that there was no need to respond in response to the ammunition found on Campus. GDOE officials indicated that they would perform an administrative search.” Tapao adds that “GPD works closely with GDOE in regards to the safety of all students and the needs of the community.”