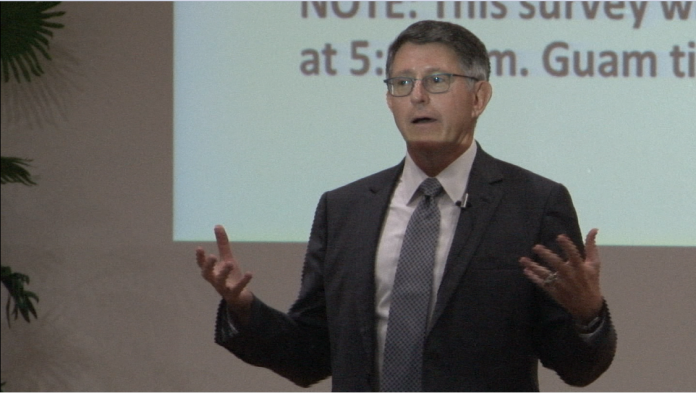 Academic hopeful graduated from a high school in the Virgin Islands

Guam – Dr. Thomas W. Krise, former president of Pacific Lutheran University in Tacoma, Washington addressed concerned citizens at University of Guam today. He told those gathered at the university’s College of Liberal Arts & Social Sciences Lecture Hall that his unique perspective qualifies him to be the University of Guam’s next president.

Although some have expressed regret that none of the members of the first group of three finalists are from Guam nor the Western Pacific, it may interest doubters to learn that original qualifier Dr. Krise graduated from All Saints Cathedral School in the U.S. Virgin Islands, according to his bio on Wikipedia. The USVI and Guam are close political partners among other U.S. territories, whose nonvoting delegates lobby for common causes and serve in the lower house of Congress together.

The Wikipedia entry also points out that Krise is a scholar on the Caribbean who once served as a Fullbright Scholar at the University of the West Indies in Jamaica. The website says he served more than 20 years on active duty in the U.S. Air Force, retiring with the rank of lieutenant colonel.

“What attracted me to the University of Guam [is] I went to high school in the U.S. Virgin Islands, and Guam has a similar political status that’s been always on my radar [with] issues of governance and representation and the relationship with the federal government and that sort of thing,” he said at the UOG forum on Monday. Krise’s academic interest is English literature with a focus on the Caribbean.

Krise also indicated his outlook would wed the best practices of public and private institutions.

After a rough start that saw one controversial finalist drop off the original list of three finalists in the presidential race at the island’s only public university, the pack is now up to a qualified four. The top picks in the University of Guam presidential search are appearing before faculty, alumni,  students, and staff this week in the highly anticipated Finalists Forum.

The UOG presidential search was mired in controversy after it was revealed that former candidate Dr. Hamid Shirvani has a sordid, controversial past, and due the utter lack of local or regional candidates until just last week. While members of the residential and university communities have already had the chance to express their concerns and opinions on the matter publicly, the forum now hands the floor to the finalists, while those in the audience listen and have a chance to ask questions.

Each finalist is given 50 minutes to present their ideas and credentials to faculty alone, then to alumni, students, and staff for another 50 minutes.

Dr. Anita Borja Enriquez, who currently serves as senior vice president of student and academic affairs at UOG, was one of two applicants added to the list of finalists after Shervani dropped out. She will speak Tuesday.

Dates, times, and venues for the forum are subject to change. Updates will be posted on the UOG website. For now, the forum proceeds at the College of Liberal Arts & Social Sciences Lecture Hall.

Current president Robert Underwood officially retired May 4th, but the Board of Regents asked him to stay as interim president till June 30th, or until the presidential search is finished.