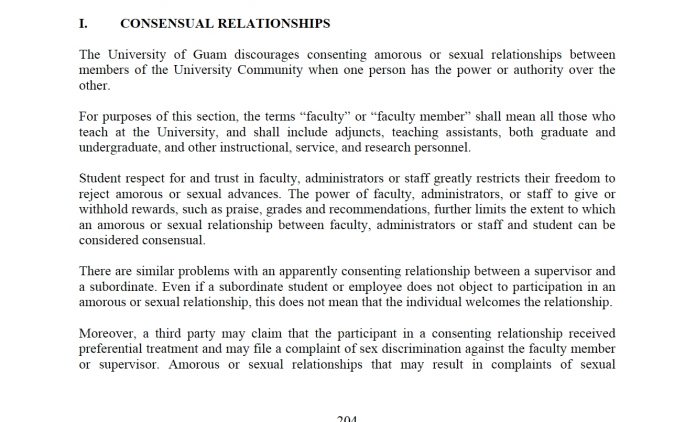 The University of Guam’s policy on Faculty to Student relationships is being questioned after an incident occurred leading to UOG’s adverse action against Associate Professor of Psychology, Michael Ehlert.

While the incident did not involve consensual relationship, some are raising the question of whether it would be beneficial for UOG to tighten their policy to prohibit faculty from dating students in the consensual regard as well.

One source pointed out to PNC that the current UOG policy on consensual relationships does not prohibit consensual relationships between students and faculty but rather discourages those relations in the event that they prove a conflict of interest.  The UOG consensual relationship policy does not address the relationship of faculty who does not hold the power of authority over another UOG student who may not attend class or work within a faculty member’s campus division.  Other public and private universities on the U.S. mainland, like Arizona State University and Standford, enforce policies that prohibit any relationship between students and faculty (Arizona State University includes specific exceptions such as prior marriage or relationship before enrollment or employement).  PNC asked UOG President Robert Underwood whether he would consider revising the policy for stricter guidelines like some of the U.S. mainlaind and he stated that he is open to discussing and considering the need for a policy change.

Underwood told PNC that the current policy addresses all faculty and students.  However, PNC mentioned the policy’s first line stating, “The University of Guam discourages consenting amorous or sexual relationships between members of the University Community when one person has the power or authority over the other.”

When PNC asked Underwood what happens when a faculty member does not have the authority over another student, he replied saying that it is something they would need to look into.

He says that the policy revision would have to go to the UOG board of directors and he would want to be sure that any supposed solution is properly enforceable without causing more of a problem than the original issue.  Underwood also added that he is doing his part to make sure to fulfill his role in administering existing rules and regulations.  When asked about considering a mirrored policy to a university such as Stanford (where there is a no-tolerance policy on student and faculty relationships), he says that he is open to consideration but must keep in mind that public and private universities differ and any changes to be considered should be handled according to UOG’s specific needs while being consistent with practices within a government institution.