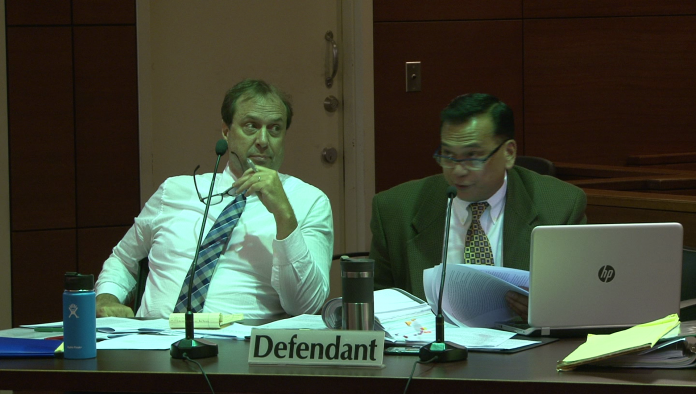 UOG President Robert Underwood says they are investigating how these complaints were possibly missed.

Guam- Last week testimony from two former University of Guam students involved in the Michael Ehlert sex abuse case alleged that they had reported their sexual assault to university faculty and staff. We followed up with UOG President Robert Underwood on these claims and his response may surprise you.

“Now in this case, a couple of allegations have been made which have not surfaced in our system so we are trying to sort that out right now,” said Underwood in an interview with PNC.

According to Underwood, the university keeps a database of sexual misconduct cases or anything referred to the EEO office for investigation. So what happened to these two cases?

“I’m assuming that they were not reported to the EEO office,” noted Underwood, who later clarified, “Now one of them may have been but there may not have been some follow up by the person who was making the allegations so that’s why there’s no documentation of these two specific accusations.”

Before last year it was not mandatory for university faculty or staff to report such instances of sexual assault or misconduct. Instead the university only “encouraged” the reporting.

PNC: “What is the standard operating procedure for faculty who receive complaints? Are they charged with having to forward that over to the EEO office or is that solely up to the victim?”

“They are encouraged to report it to the EEO office but of course you need the victim’s cooperation in order to create an investigation,” Underwood responded.

But according Title IX of the Civil Rights Act of 1964, which protects students from sexual harassment and violence that occur in the school setting, once a school official knows of or reasonably should have known about sexual harassment or sexual assault on campus, the school is required to promptly investigate the complaint and take steps to protect its students.

It further states that if you believe your school has failed to investigate complaints or protect students, you can also file a complaint with the federal government agency charged with enforcing Title IX.

“Under the current policy, they are, but of course our policy just changed last year. So under the previous policy, faculty members were encouraged to report these incidents to the EEO and to encourage the victim as well,” explained Underwood. “But now that we know about these instances, the University reserves the right to conduct further investigations on our own in both of these cases subsequent to the proceedings of the trial.”

It wasn’t until after the allegations against Ehlert were brought to light that UOG conducted a 2016 campus climate survey report which indicated that as many as 80 students had experienced some form of sexual misconduct which is a big difference from what is in the database.

But none of the cases that were reported involved the faculty or staff the two victims claimed to have reported their allegations to.

“The sequencing of all of that is going to be subjected to an investigation. We don’t know what the sequencing is. We’ve only heard of this in the course of this trial. So in consequence of that, we will, of course, conduct an investigation subsequent to the trial,” Underwood assured.

Ehlert is currently on trial for allegations of criminal sexual conduct involving three former UOG students who accused their professor of sexually assaulting them during a 2014 Halloween party at Ehlert’s residence.

In addition to the three known alleged victims, two more have come forward with similar allegations.