Guam – The University of Guam will welcome a special law panel for its 40th presentation of its at 6:00 p.m. on Thursday, May 2, in the CLASS Lecture Hall on the UOG Campus.

The panel is being presented in celebration of Guam Law Week with the theme “Evolving Liberty: Guam 75 Years Later.”

The panel is presented in collaboration with the Judiciary of Guam, District Court of Guam, and Guam Bar Association. 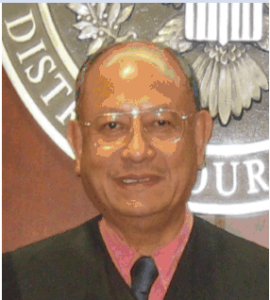 Manibusan is serving his second eight-year term as U.S. magistrate judge of the District Court of Guam, a position appointed by the chief judge that he has held since 2004. Prior to his appointment, he served as a judge in the Superior Court of Guam, a designated district judge for the District Court of Guam, a designated justice for the Superior Court of Guam, and a pro tem judge for the Northern Mariana Islands. He began his legal career as an assistant attorney general of Guam from 1975-1977, then spent time in private practice, where he served as legal counsel to various government of Guam boards and agencies. Manibusan holds a bachelor’s in political science and a juris doctorate from the University of California, Berkeley. 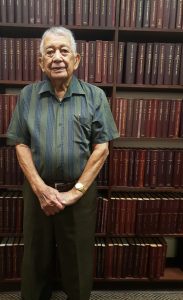 Arriola has been a practicing attorney in Guam for more than 65 years through his private practice, Arriola, Cowan, & Arriola. He also served the public sector starting in 1954 as senator for four terms and counsel of the legislature for four terms. Arriola has been admitted throughout his career to practice before the U.S. District Courts of Guam and the Northern Mariana Islands, the Supreme Court and Superior Court of the Marianas, the Supreme Court of the State of Minnesota, the U.S. Court of Appeals for the Ninth Circuit, and the U.S. Supreme Court. Arriola holds a bachelor’s degree from St. Thomas College in Minnesota and a juris doctorate from the University of Minnesota Law School.

Camacho is the attorney general of Guam. Prior to being elected to the office in 2018, he spent 12 years in private practice. During that time, Camacho handled more than 100 criminal cases and more than 15 Supreme Court of Guam appeals, assisted the governments of Guam and the Northern Mariana Islands in reviewing complex environmental impact studies, litigated several land rights and environmental justice cases, and served as local counsel in a national lawsuit seeking to extend voting rights to U.S. citizens living in the territories.Camacho holds a bachelor’s in English literature from the University of Washington and a juris doctorate from Boston University.