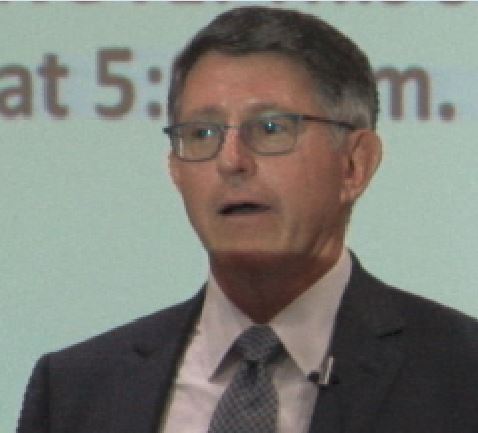 Enriquez: ‘The Natural Choice’ now has a different definition

Guam – After a race marked by its fair share of controversy, Dr. Thomas W. Krise has  secured the presidency of the University of Guam.

In the second and final round of votes cast by the Board of Regents on Thursday night, the former President and current President Emeritus of Pacific Lutheran University in Tacoma, Washington, Thomas W. Krise, bested University of Guam Senior Vice President of Student and Academic Affairs Dr. Anita Borja Enriquez in a tabulation that showed Krise with six votes to Enriquez’s two.

Responding to criticism that his pending replacement doesn’t fit the mold for a UOG presidency, Interim President Dr. Robert Underwood was upbeat and response-ready. “We’re looking for leaders, not followers,” he said.

Underwood added that it’s too early to speculate how much the University of Guam will change under the leadership of Krise, but the outgoing president argues many of his own locally and  regionally inspired initiatives are so ingrained in the land grant institution after his decade of service as president that they’re now part of UOG’s DNA.

On Newstalk K57 Friday morning, Underwood reminded Patti Arroyo’s radio listeners that this 60-candidate presidential application and selection process stands out in a most significant way.

“This is the first time in the university’s history that people who had been president in another university had applied to be president of the University of Guam,” he said.

“I’m not sure what that says, but, certainly, in our whole history as an institution, no previous president has ever applied to be president, so there’s something about that search process.”

Dr. Krise, who  hails from the US Virgin Islands and  touts a familiarity with political status issues affecting US territories, holds a PhD from the University of Chicago and retired from a 22-year career in the Air Force, where he earned the rank of Lt. Colonel.

Dr. Enriquez, a loyal and longtime high-ranking member of the UOG faculty and management, was the lone local candidate for the job. She enjoyed overwhelming popular support in her bid for the top spot. Enriquez  said she was disappointed following Thursday night’s vote selecting Krise, she bears no hard feelings and will assist the Underwood-Krise transition.

“Clearly the board had some other vision in mind for the institution, and we’ll just have to respect the outcome of that,” Enriquez said.

“I recognized that there would be a transition period this year, and we weren’t quite sure how that was going to roll out until [Thursday] night. So that, obviously, was a decision that the regents had a major surprise for many of us in the university community. That’s certainly something that everyone’s going to have to adjust to, and we’ll just have to make the preparation for that new transition.”

Referring to a popular slogan that the university has adopted to push local enrollment, Enriquez waxed poignant.

Phill Leon Guerrero and Janela Carrera contributed to this report.