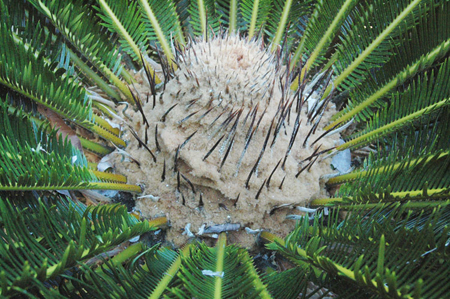 Guam – Everyone needs to eat. But it’s a dog-eat-dog world, and with the exception of the top predators, everyone also gets eaten. To cope with this vicious reality, a tiny insect that eats plants has learned to employ the plant’s hairs for physical protection from its beetle predator.

The pest is called the cycad aulacaspis scale, and its invasion into numerous countries in recent years has caused immeasurable loss of biodiversity. Cycads belong to an ancient lineage of plants that date to the dinosaur era, and the pest requires a cycad plant for food. The insect’s recent invasion to Guam has endangered fadang, island’s endemic cycad species. Local biologists introduced a voracious beetle predator to the island to eat the scale insects, but the plant damage by the pest has persisted.

“We began looking into the reasons that the beetle was failing to control the pest, and discovered that the pest could crawl between the plant’s trichomes to reach its feeding sites,” said UOG Professor Thomas Marler. Trichomes are what biologists call the hairs that can be found on many plant leaves and stems. Unfortunately, the much larger beetle predator could not make the same journey through the trichomes to feed on the scale insects that were feeding on the plant beneath the trichomes.

[UOG File Photographs: The numerous tan-colored plant hairs produced by this cycad plant protect the cycad aulacaspis scale insect from being eaten by a beetle predator]

Plant hairs serve several functions, and one of those functions is to protect the plant from insects. “The glitch in this situation was that the insect that was excluded by the plant hairs was our beneficial insect that eats the scale pest, and the insect that could just walk straight through the hairs was the very pest we wished to control,” said Marler.

Insects that eat plants have adopted numerous strategies to avoid getting eaten. One of those strategies is to co-opt one of the tactics that plants effectively use to avoid getting eaten. For example, plants produce a plethora of chemicals that taste bad or serve as a poison to herbivores. These chemicals are effective in deterring the feeding of most general insect herbivores. A well-studied practice by some specialist insects is their predilection to consume these plant poisons, sequester those poisons into parts of their body, then exploit the poisons for their own protection.

“Here we find another example of how an herbivore insect can be confronted with a plant’s behavior that helps reduce the likelihood of being eaten, then take advantage of that behavior by using it for the same purpose,” said Marler. This particular plant-pest-predator relationship has drawn the attention of biologists in the Western Pacific Tropical Research Center at the University of Guam because this pest is threatening cycad populations in other countries. Lessons learned on Guam may benefit cycad conservationists in those other countries. Marler’s research appears in the November issue of the journal Plant Signaling and Behavior.