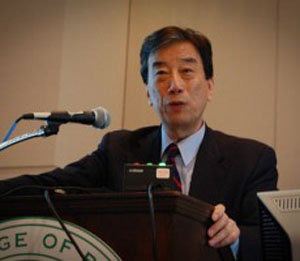 Guam – The latest speaker in the University of Guam Presidential Lecture Series is a spirited and unconventional scholar who believes that limits should be tested and new ground must always be broken.

Dr. Kiyoshi Kurokawa has a fascinating professional career that spans over 15 years each in both Japan and the U.S. He will be speaking on “Uncertain Times; Changing Principles” at 5:30p.m. on Monday, October 14 in the College of Liberal Arts & Social Sciences Lecture Hall at UOG.

Dr. Kurokawa’s career has been dedicated to improving the lives of people through tireless efforts to promote a safer and healthier society in Japan and globally. He spent years campaigning for reform in education and government policy. Most recently, he led an independent inquiry into the Fukushima No. 1 nuclear plant crisis that unfolded in the days and weeks after the earthquake and tsunami of March 2011.

As a man who espouses, the Japanese proverb “be the nail that sticks out,” his unique experiences and ideas are a testament that he has chosen the path of reformation and innovation instead of conforming to the norm. He is a medical doctor with the expertise to effectively run organizations and play politics. He was the first and last science adviser to two Japanese Prime Ministers and is known for his charisma and ability to say tough things while being fair and honest. His body of work has enabled him to earn numerous recognitions from around the world including the Order of Purple from the Japanese government for academic achievement.

Among his current appointments, Dr. Kurokawa is an Academic Fellow for the National Graduate Institute for Policy Studies and as the Chairman of the Health and Global Policy Institute, a Japan-based neutral, non-profit, private think-tank which aims to achieve a “citizen-driven health policy. He continues to serve in many committees of the Ministries of Japan, most recently, as the Chairman for the Parliamentary Commissioned Independent Task Force for Fukushima Nuclear Accident Investigation (2011.12-2012.7).

Dr. Kurokawa is well-known in his professional communities both nationally and internationally. After earning his MD from the University of Tokyo School of Medicine and becoming an expert in nephrology, he moved to the U.S. where he spent time as a research fellow at the University of Pennsylvania, before earning his California medical license and serving as a professor at the University of California in Los Angeles. He returned to the Tokyo University School of Medicine in the 1980’s where he served as a professor of medicine and eventually dean and professor of Medicine of Tokai University School of Medicine. Dr. Kurokawa served as an executive member of many national and international professional societies of his disciplines, including President of Science Council of Japan, Commissioner of WHO, as a Board member of A*STAR in Singapore, Khalifa University in Abu Dhabi, and as part of the Advisory Board to the Prime Minister of Malaysia.

Accolades are nothing new to Dr. Kurokawa, he also earned the Order Legion de Honour of the Government of France (2009), Person of the Year of the American Chamber of Commerce of Japan (2010), the Order of the Rising Sun, Gold and Silver Star (2011 Spring), AAAS Award for Scientific Freedom and Responsibility (2012) and of ‘100 Top Global Thinkers’ of Foreign Policy (2012).

A graduate of University of Tokyo Faculty of Medicine; in the US, 1969-85, was a professor of medicine, departments of medicine of UCLA School of Medicine (1979-84), of University of Tokyo, (1989-96), Dean of the Medical School at Tokai University (1996-2002), President of Science Council of Japan (2003-06), Science Advisor to the Prime Minister (2006-08). He served as an executive member of many national and international professional societies of his disciplines, Commissioner of WHO (2005-09), serve as Board members of A*STAR (Singapore), Khalifa University (Abu Dhabi), Advisory Board to the Prime Minister of Malaysia; elected member of various scientific societies including Institute of Medicine of the National Academies of Sciences of USA, Master of American College of Physicians and Founding Governor of ACP Japan Chapter, 2003-2011. Served and serves in many committees of the government of Japan. As December 2011-July 2012, he chaired Fukushima Nuclear Accident Independent Investigation Commission by the National Diet of Japan (NAIIC), received for his NAIIC work AAAS Scientific Freedom and Responsibility Award, and ‘100 Top Global Thinkers 2012’ by ‘*Foreign Policy’.

Dr. Kurokawa will be speaking at 5:30pm on Monday, October 14 at the College of Liberal Arts & Social Sciences Lecture Hall at UOG.

The public is invited to attend. For more information, contact Louise Toves at 735-2995 or email lmtoves@uguam.uog.edu.