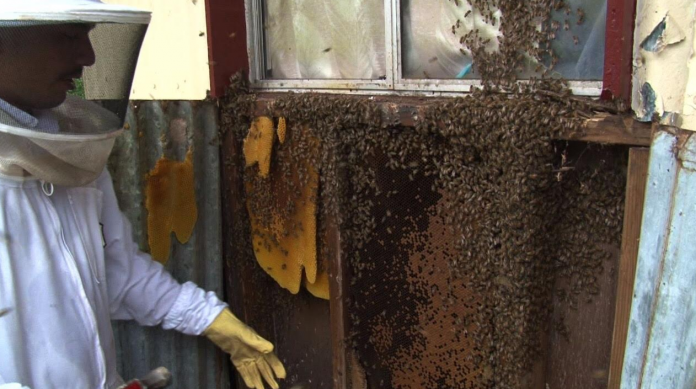 “We potentially have two beehives, and it’s probably been here for about 16 years,” Chris Rosario, UOG research associate.

Guam – Chris Rosario, a research associate from the University of Guam and his team are on the lookout for wild bee colonies. And for this extraction, they might have hit the jackpot.

“We potentially have two beehives, and it’s probably been here for about 16 years,” Rosario said.

He explains that an average beehive has one queen and about 100,000 bees. This one, Rosario says, could have about twice that amount.

In fact, the hives have overtaken significant parts of the residence. Since one of the hives has been around since Typhoon Pongsona, Rosario says this could potentially be his biggest honey bee extraction to date.

“Hives like these are considered feral because they’re not maintained. They’re not being handled by humans. They’re just on their own doing their own thing,” he said.

But for the self-proclaimed “Bee Team”, this is nothing out of the ordinary. The team begins the removal process with a smokescreen which serves as a form of disorientation for the bees. Next, the research team carefully pries away at the structure so as not to destroy the hive underneath. Using a special vacuum, the bees and their queen are extracted for research.

“We’re doing a national honey bee survey funded by USDA, and again, it just looks at the overall health of the bee colonies on Guam. Basically, what we’re doing is testing for mites, for viruses, testing for any other pathogens that are affecting pathogens all over the world. We want to get a good look at where Guam sits with the overall health of the bees,” he explains.

About three years ago, Rosario found the varroa mite in the bees he extracted at Southern Comfort Ranch. Thankfully, the researcher says they have not yet found any beehives that have tested positive for the mite, or any viruses associated with the mite since then.

This is good news, considering there’s a sweet payoff for domestic beekeepers.

“I know the pollination industry right now. They’re putting in around $13.5 billion in pollination,” Rosario said.

The bounty on one queen bee alone is $100 and Rosario says other countries have been exporting the winged-wonders by the thousands.

“In Europe, they sell these queen bees. They ship off bees from Europe into the US. New Zealand is able to export queen bees, and they mail them by the thousands,” he says.

On Guam there are only about a dozen local beekeepers and Rosario hopes that with the increased awareness on the necessity of bees, the beekeeping business itself will one day, bloom.