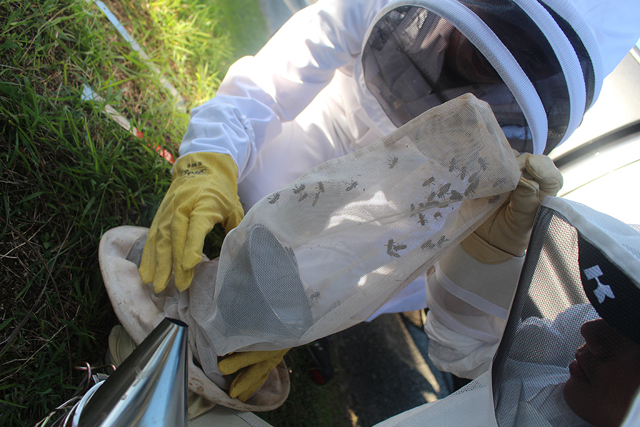 Guam – Dr. Ross Miller’s Entomology Lab at the University of Guam Western Pacific Tropical Research Center (WPTRC) has its antennae in a lot of hives with the first-ever survey of the island’s honeybee population.

Honeybee health in the U.S. mainland has been in decline for many years: mites, diseases, and environmental toxins have taken their toll on honeybee populations throughout the states. Funded by the United States Department of Agriculture Animal and Plant Health Inspection Service, this national survey will look to understand what viruses, mites, pests or other factors may be influencing honeybee health. With a clearer understanding of what is negatively impacting bee colonies, scientists are hoping to find efficient methods to mitigate this decline.

“The varroa mite has infected bees throughout the country. If Guam can be declared a varroa free zone, beekeepers on island may be able to provide queen bees certified to be free of the damaging mite to stateside beekeepers. This could be a potential new apiary opportunity for the island,” says Miller.

Bees pollinate many of our favorite foods including cherries, oranges, lemons, cucumbers, blueberries, carrots, almonds, avocados and more. Bees are also important pollinators of forest plants and trees. Pesticide use, habitat loss, genetically modified crops, and global warming have been cited by researchers as playing a role in the declining health of honeybees.

Conducting a survey of this magnitude takes a considerable amount of behind the scenes activity and coordination. Research assistant and UOG graduate Chris Rosario has been charged with contacting beekeepers on Guam to inform them of the survey and schedule times to take samples of their bees and hives.

“I will need to get samples from a total of 24 domestic and feral (wild) colonies from around Guam. My task is to collect a 1/2 cup of bees from each hive” says Rosario. Dressed in his bee suit and armed with a bee smoker Rosario will also be checking the hives for mites and collecting them if he finds any.

Rosario plans to get a representative sample from bees around the island. He has identified 3 feral hive sites and is asking that members of the community who know of wild beehives in their neighborhoods and villages to contact him at 487-1640.

WPTRC scientists continue to serve the needs of Guam’s people, plants and animals through securing grant monies and carrying out valuable research.