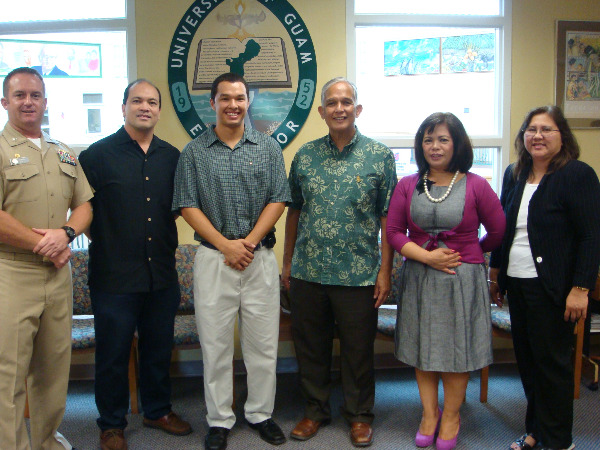 Guam – University of Guam student David Robbins was selected to participate in the Military Sealift Fleet Support Command’s (MSFSC) Shoreside Student Education Employment Program. He is the first student hire for the MSFSC Ship Support Unit Guam under this program.

The internship lasts for six months and will provide Robbins with experience in federal contracting and other areas. He is currently a part-time student at UOG and will work approximately 40 hours per week during his internship.

“We will work with him to arrange his work hours around his course schedule and ensure that his education is a priorty,” said Patrick Dimla, contracting officer for MSFSC.

“MSFSC contacted the Career Development Office last year to let us know about their program and their interest in working with University of Guam students,” said Leah Beth Naholowaa, UOG Career Placement Officer. “David was selected from a pool of 14 applicants after interviews held in July and August. David is certainly looking forward to his internship with MSFSC.”

Ship Support Unit Guam, or SSU Guam, provides operational, engineering, logistics, contracting, medical and administrative support to all of Military Sealift Command’s government-owned, operated and controlled ships and their associated crews operating in the Western Pacific. These ships support U.S. military interests in the region. Guam is a logistics hub for Military Sealift Command interest ships, which often call upon ports in the region including Guam, Saipan, Tinian and Palau.