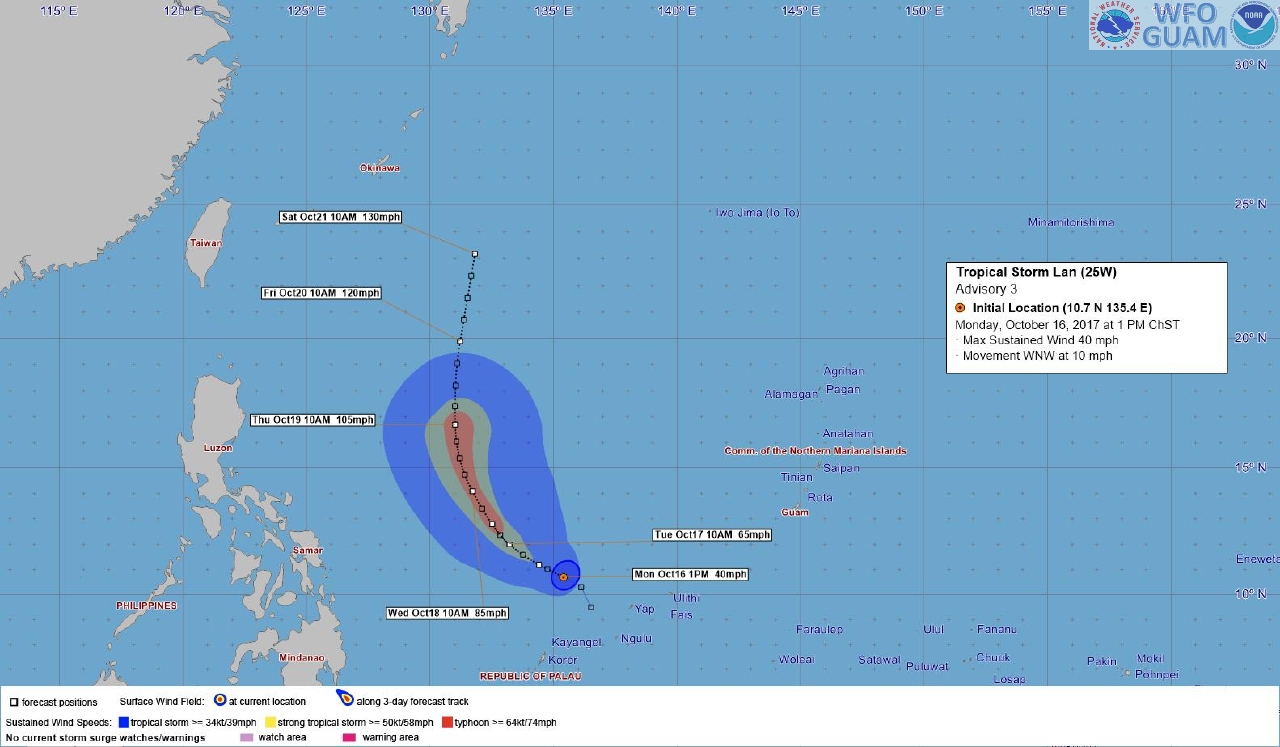 ***Tropical Storm Lan has now intensified to a typhoon, located 12.5 N & 132.2E. About 390 miles North Northwest of Koror, 450 miles West Northwest of Yap & 845 miles West of Guam. Maximum sustained winds is at 75 mph. with its present movement North 360 degrees at 12 mph. Typhoon Lan will continue to move away from Yap and Palau and stay well West of the Marianas. It will cause strong Southwest winds to develop over Western Micronesia that will generate a large Southwest swell, which will reach the Marianas today and tonight causing surf to rapidly build to hazardous levels.

*** The National Weather Service has issued a High Surf Advisory until 6 am Monday for south and west facing reefs.

South facing reefs will experience hazardous surf of 7 to 10 ft. this morning and will briefly fall this afternoon. However, it will rise tonight between 8 to 11 ft. overnight. Surf will gradually subside along south facing reefs late in the week as the Southwest swell redirects West.

West facing reeds will experience hazardous surf of 7 to 10 ft. for Tinian and Saipan as well as surf of 5 to 7 ft. for Rota and Guam, which will build this evening and overnight to between 8 to 11 ft. As southwest to west swell increases Thursday surf will build between 10 to 13 ft. Surf may also increase further over the weekend, possibly becoming dangerous at 15 ft.

*** The National Weather Service has issued a Wind Advisory until 7 pm this evening. Southwest winds will be at 20 to 35 mph with gusts of 45 mph in heavy showers.

*** Another weak circulation about 85 miles West Northwest of Saipan near 16N145E is expected to develop within the monsoon trough over the Marianas as it moves eastward through tonight. This circulation and monsoon will maintain gusty showers and isolated thunderstorms through Thursday night. Improving weather is expected later in the week.

Be aware of hazardous road, water and wind conditions. Take the proper precautions.