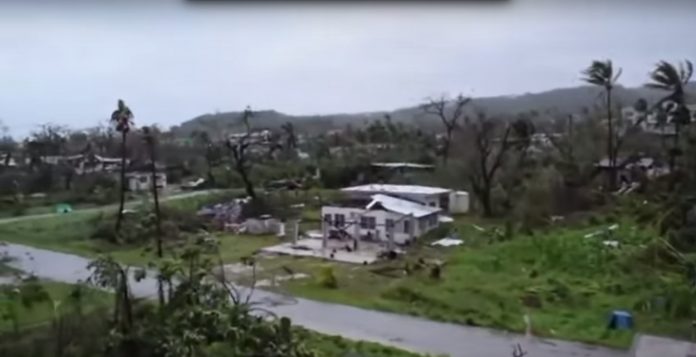 Guam – It’s been almost 2 weeks since Typhoon Soudelor hit Saipan and as part of our continuing coverage of the recovery efforts, we spoke to someone with direct involvement in the recovery process.

In Saipan, in the aftermath of Typhoon Soudelor, things can change rapidly as various convoys’ roams the streets delivering much needed supplies and manpower. This became apparent during a conversation with CUC spokesperson Brad Ruszala about an update with the restoration of power and water to the Island as a marine convoy arrived with more supplies, mid conversation.

But we spoke with Ruszala to talk about how the restoration of water and power to the island was moving along. He tells PNC that just this morning, FEMA arrived with generators to help re-energize the reservoirs that help with pumping water to residents of Saipan.

“We’ve already been able to re-energize them, we’ve just received some new generators from the army corps of engineers, through FEMA assistance. We are able to now put water into those reservoirs, in addition to others. In fact we sent three more that came online between last night and this morning that we’re able to start filling now,” said Ruszala

He says that once the reservoirs are reenergized, the CUC will be able to provide water to several villages across Saipan for 2-4 hours a day depending on which village you live in.

In terms of power, Ruszala says that the damage to the power infrastructure was massive. He says their primary feeder lost 45-percent of its power poles during the storm and that s just one feeder out of several across island. Last week, Guam Power Authority sent over personnel as well as electrical equipment, poles and wires to help assist in the recovery.

Looking back, Ruszala says that things on Saipan have changed drastically from just one week ago.

“People in some villages can turn on their faucet and water comes out, last week that would have…it seemed…it didn’t seem impossible but it seemed like it was gonna be a very difficult task to do. Last week, on this day last week we had power poles covering our main roads, we had trees down,  we had people who couldn’t get out their homes, we had people with power poles resting on their house and today a lot of that’s gone,” said Ruszala