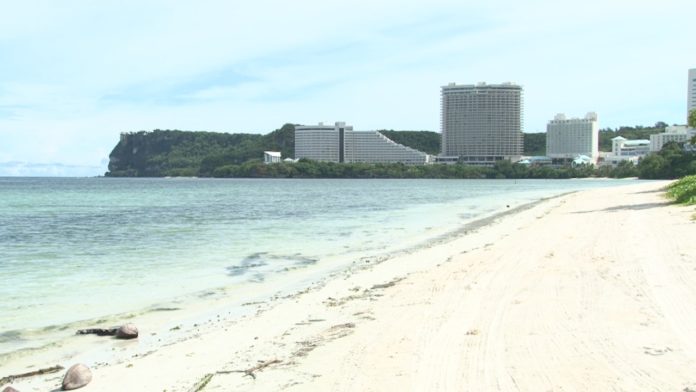 Governor Lou Leon Guerrero has extended the Island’s ‘Stay-At-Home’ orders, the more restrictive measures in our PCOR 1 state, by one-week. They are now in effect until 12 p.m. on Friday, September 4.

She made the official announcement at her afternoon news conference Thursday, after first  announcing Guam’s 10th COVID-related death: a 96-year-old female who was pronounced dead on arrival at Guam Memorial Hospital earlier in the morning.

All other previous restrictions remain (see Executive Order in full below).

The Governor also extended Guam’s Public Health Emergency declaration until September 30, allowing her to implement restrictions as the Island fights off what appears to be the 2nd wave of the pandemic.

The move to keep Guam in the ‘stricter’ PCOR 1, according to Leon Guerrero, is based on the Island not meeting the four criteria to move to less restrictions (PCOR 2, 3). Further compounded by two deaths at GMH on Wednesday, the same day we recorded our single highest one-day total for new cases, followed by a 10th death on Thursday morning.

Some 70% of Guam’s over 1,000 cases recorded thus far have been in August alone.

“The medical, nursing and general community should also be concerned because the number of cases admitted to the hospital is increasing and the severity of their illness is worse than what we saw in March, April and May. We’re seeing cases of pneumonia, which is an indication that it’s infecting their lungs. The doctors at the hospital are very concerned about that,” said the Governor. 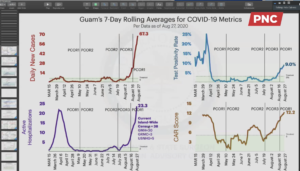 At the conference Thursday, Dr. Felix Cabrera from the Governor’s Physicians Advisory Group said our healthcare system is stretched beyond capacity and he anticipates the case numbers will continue rising over the next week.

“It will get worse, before it gets better,” said Cabrera.

The most obvious difference between our first round of PCOR 1 and this time, is our slow-to-decline mobility this time around, with Cabrera saying people are not staying home as much as they should be and as quickly as required to curb the rising cases.

In one of his slides, Cabrera said, “the daily new cases…are literally off the chart.” 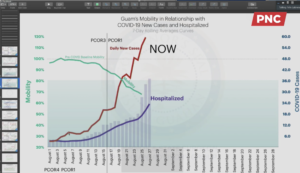 We’re currently staring down a 9% test positivity rate and a 23 person-average hospitalization rate; the highest we’ve seen since the pandemic hit the Island in mid-March.

As of today, Thursday, 38 people were admitted to Island hospitals for COVID-treatment, including 30 at GMH, three at GRMC that were awaiting transfer to GMH, and 5 at Naval Hospital.

The Governor is set to meet with Secretary of Defense Mark Esper this weekend, who’s also meeting with Guam’s State Surgeon Cell. The Governor says they’ll be discussing the Island’s medical needs and the request for some 40 nurses, and an unspecified amount of doctors and respiratory therapists is being routed through FEMA.

Despite the Governor saying that she and Joint Region Marianas Rear Admiral John Menoni have been in continuous conversation over the Island’s needs, ultimately, any request for assistance is made through FEMA, which then determines if military support is the best suited for Guam.

In an exclusive interview with K57, JRM Commander John Menoni said, “because it is above my level and above the Governor’s level, it’s at a federal level right now that DoD, FEMA and Government of Guam are all coordinating on that request, I don’t have an exact timeline. We’ve leaned as far forward locally here to be prepared to support, if we’re asked through the FEMA DSCA (Defense Support of Civil Authorities) and that we are ultimately tasked by DoD leaders to do this.”

Menoni said unless a situation is imminent, for example a car crash immediately in front of him or something happening within 24-72 hours, he does not have the ability to make a unilateral decision to support GovGuam.

“We’re making sure that DoD, FEMA, GovGuam, all the communication lines are open. We’re working through this and monitoring it and I’m talking with potential off-Island sources of support, should the tasking come to DoD, to make sure everyone is aware of what’s happening on the ground here, so that when they show up, we shorten the timeline of that whole learning process before they really can get to work, that everyone has situational awareness, so that when they get to the ground they can get after it,” said Menoni.

The additional staff, detailed from whichever agency/source FEMA decides to task, would be coming in to support GMH, GRMC, and the Naval Hospital, which is also dealing with an increase in confirmed cases.

The medical assignment is an emergent situation according to Leon Guerrero, who also said the military’s on-Island hospital tent is not a negative-pressure facility, meaning it does not meet public health standards for COVID-patient treatment.

However, it can be used for non-COVID patients, so that GMH and GRMC can focus on virus-stricken residents.

Menoni said much like Guam, all U.S. states and territories are battling the same enemy: “I think this is the first time that we’ve ever seen where FEMA and local governments and federal governments and DoD and everyone is trying to respond to an incident that’s happening everywhere, at the same time.”

In what are some of the grimmest days in the Island’s fight against COVID, the Governor didn’t mince words:

“When we refuse to wear a mask around others, when we assume that our individual health must mean that everyone else is strong and healthy, when we treasure our rights without accepting our responsibilities, we invite danger to the most vulnerable. The Manamko, the frontline worker and the nurse.”