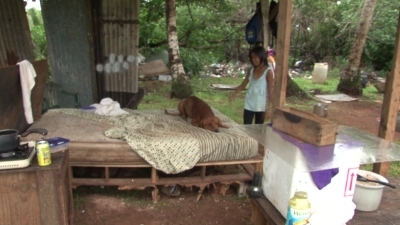 Typhoon Dolphin leaves a Yigo family homeless but now they have a new home in Dededo until GHURA can provide more.

The aftermath of Typhoon Dolphin left single father, Billy Fejeran and his daughters stranded and literally powerless.  His home sustained damages that left him unable to rebuild their demolished home and had no choice but to make use of the half that barely provided shelter from weather.  Conditions were so rough that they only had a garden hose as a water source for bathing and hydration.  Mayor Rudy Matanane stepped in after hearing about the situation and took donations from the community as he made a call for support. When PNC asked Fejeran about the changes, he paused in a moment of disbelief of his comparison sharing, “Oh wow… Where I was before was not that great.  Now, it’s beautiful. I love the way I’m living now. Thanks again to the Mayor and the community of Yigo.”

Currently, the family has been safely placed in a home in Dededo thanks to the help of Guam Housing Corporation and they are currently working with Guam Housing and Urban Renewal Authority in order to find the family a long term home.  With the help of donations, Fejeran’s daughters now have school supplies and uniforms before their first day of school approaches.  It is something Mayor Matanane says he feels is the responsibility of the community and not just the government alone.

Matanane stated that he hopes this will open the eyes of people in the community to see how important it is to help one another.  He hopes to build a stronger community in Yigo as a result of the situation as well.

PNC asked Fejeran what advice he would give to other families that are in similar situations to his and he replied, “Just pray. Believe in God and everything shall fall in place.”

However, Mayor Matanane says that the family is still in need of donations, specifically an ice box, clothing, basic furniture, and financial support.  If you would like to contribute please call the Yigo Mayor’s office at 671-653-5248.