The Da Cheng was targeting albacore tuna using 10 miles of large-scale drift nets and had already caught about 30 metric tons albacore tuna during its current trip. In addition, the Coast Guard found six metric tons of shark bodies and fins onboard the vessel.

High seas drift net fishing is a destructive fishing practice and a form of illegal, unreported and unregulated fishing that indiscriminately kills massive amounts of fish and other marine life such as whales, sea-birds, sharks and turtles by means of enormous nets suspended for miles in open water. The practice is universally condemned and is a significant threat to ocean ecosystems and to the food and economic security of nations and communities that rely on fisheries resources.

“Our Chinese law enforcement partners take the practice of HSDN fishing as seriously as we do. I have full faith that they will utilize the most stringent methods possible to prosecute the vessel and its owners,” said Rear Adm. Thomas Ostebo, Commander, Coast Guard 17th District. 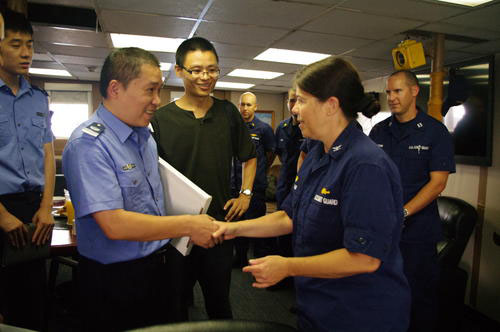 The crew of Coast Guard Cutter Rush sighted the Da Cheng on the high seas of the North Pacific Ocean and boarded the vessel at sea in accordance with the Western and Central Pacific Fisheries Commission’s high seas boarding and inspection procedures on July 27, 2012. The vessel was subsequently determined to be operating without valid flag state registration.

The Rush’s boarding team reported that the Da Cheng displayed the characteristics of a renegade vessel engaging in HSDN fishing. The boarding team identified three serious WCPFC violations; use of prohibited fishing gear including more than 2.5 miles of high seas drift net, failure to maintain sufficient records of catch and catch-related data in accordance with the WCPFC reporting requirements, and fishing without a license, permit or authorization issued by a sanctioned authority. In addition, violations of the International Convention for the Prevention of Pollution From Ships (MARPOL 73/78) were also documented by the Coast Guard.

“The roles our high endurance and National Security Cutters play at detecting, monitoring, and interdicting IUU fishing vessels highlight their continued value to the American public on the high seas. We, along with our partner nations and law enforcement agencies, are working to protect vital world fish stocks while working to end this despicable and illegal fishing practice,” said Ostebo.

As the only U.S. agency with the infrastructure and authority to project law enforcement presence throughout the 3.36 million square mile U.S. Exclusive Economic Zone and in key areas of the high seas, the Coast Guard is the lead U.S. agency for at-sea enforcement of living marine resource laws. This case reflects the value of having a multi-mission maritime service adequately equipped to protect critical marine resources.

“Our continued close working relationship with enforcement partners including the Coast Guard really pays off in situations like this,” said Sam Rauch, deputy assistant administrator of NOAA’s Fisheries Service. “Annual global economic losses due to illegal, unreported and unregulated fishing are estimated to be approximately $10 billion to $23 billion. This is felt throughout the world, including by our fishermen here in the U.S.”

The Honolulu-based Rush is a 378-foot high endurance cutter capable of performing worldwide search and rescue and law enforcement missions.