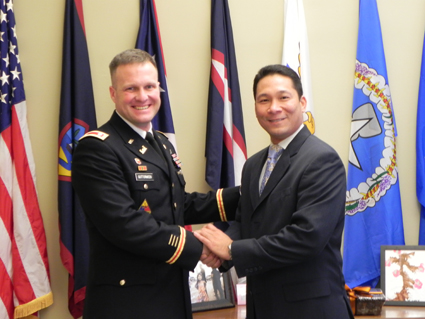 Guam – Assistant Secretary of the Interior for Insular Areas Tony Babauta met recently with Lieutenant Colonel Douglas B. Guttormsen, Commander of the Honolulu District of the U.S. Army Corps of Engineers (ACOE), and members of his staff to discuss the assistance being provided by the ACOE for various projects and initiatives in the Pacific funded by the Office of Insular Affairs (OIA). Among the priority projects discussed was the repair of the Palau Compact Road.

The 53-mile long Palau Compact Road was funded by the United States through the Compact of Free Association agreement between the U.S. and the Republic of Palau (ROP).  It was completed and conveyed to the ROP on October 1, 2007.  However sections of pavement have been damaged as a result of heavy rains.  At the request of the ROP President Johnson Toribiong, the Office of Insular Affairs has partnered with the ACOE to assess and then repair the damaged sections.  Lieutenant Colonel Guttormsen informed Assistant Secretary Babauta that initial work has begun and a team, which is currently being mobilized, should be sent to Palau by mid-April.

“The prompt repair of the Palau Compact Road is a priority for both the US and the Republic of Palau,” said Babauta.  U.S. Ambassador to Palau Helen Reed-Rowe and I have been working closely to ensure that the repair of the Palau Compact Road is done in such a way to avoid any similar future problems.  Ambassador Reed-Rowe and I are also very pleased the Army Corps of Engineers recognizes the importance of moving expeditiously on this project and we have great confidence in the leadership of Lieutenant Colonel Guttormsen.”

“For decades, OIA has successfully partnered with the Army Corps of Engineers to assist the insular areas address their infrastructure needs.  I look forward to that partnership continuing as we strive to improve the quality of life for residents of the U.S. territories and the Freely Associated States.” he added.

The Palau Compact Road is a 53-mile long road that encircles the island of Babeldaob, the largest of Palau’s more than 300 islands.  Assistant Secretary Babauta and Ambassador Reed-Rowe announced the U.S.’s commitment to fund repair and reconstruction of the damaged portions at the conclusion of the 14th Micronesian Chief Executives’ Summit hosted by the Republic of Palau in December 2010.