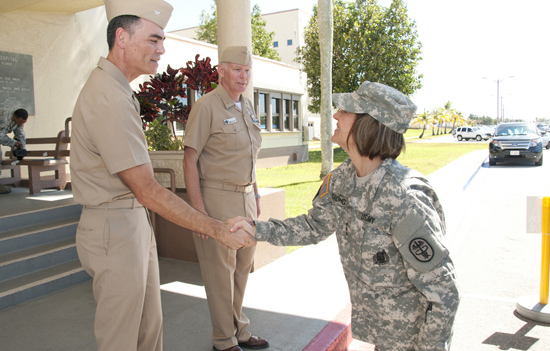 Lt. Gen. Horoho toured the hospital and met with Executive Officer Capt. Michael McGinnis and Command Master Chief (SW/AW) Robert Burton  She is in the midst of an Asia-Pacific tour that began with a visit to Tripler Army Medical Center in Hawaii.

Horoho is on a command visit to various medical facilities throughout the Pacific to review the health structure, system, assessment and key leader relationship-building opportunities in support of the Command Theater Campaign plan. 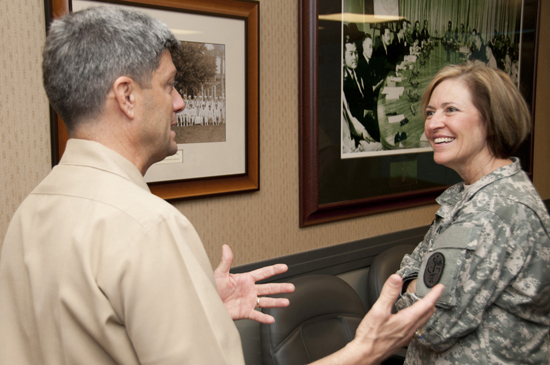 AGANA HEIGHTS, Guam (NNS) — The Surgeon General of the Navy, Chief of Navy’s Bureau of Medicine and Surgery visited Navy, Air Force and Army commands on Guam during a two-day visit May 21-22.

“I’ve always known we do a good job here in Guam, but after talking to the senior line leaders from the base at the Andersen Air Force Base to the big Navy base to this national guard here this hospital and staff are hitting it out of the park,” Nathan said.

During his visit to USNH Guam, Nathan held an admiral’s-call which brought together enlisted Sailors and officers. He applauded medical staff for their courtesy, professionalism and desire to care for the patients on island.

Hospital Corpsman 1st Class (FMF/AW) Rufino Vegamora, of the Department of Public Health Preventive Maintenance division of USNH Guam, attended the admiral’s-call and said he was glad to receive feedback and support regarding the hospital staff’s performance.

“Its closure for my junior guys, those who provide medical service to our shipmates, our medical beneficiaries,” said Vegamora. “It’s that part right there that is showing to them, ‘Yes, you are doing a great job,’ and now the highest ranking person in navy medicine is validating what we are doing.”

Upon his visit to the Mercy, Sailors on the vessel had an opportunity to speak directly with the admiral during his tour.

Nathan explained to the Sailors the importance of their mission during the upcoming Pacific Partnership 2012.

“I think this mission represents a great opportunity for a theatre security engagement,” said Nathan. “It’s a mechanism to display the compassion and the ethos of this joint partnership which includes this naval service, our international partners, our volunteers and all of our services to come together in order to show other countries that we want to engage and share what we have and that we want to learn from you.”

Nathan also shared his view that the crew will receive an overwhelming benefit that will last a lifetime from the experiences they will have and see on their current deployment.

“Don’t underestimate the role you play in the greater strategic imperatives of in the Navy, in the Army, in the Air Force and in the Marine Corps,” he said.
Nathan reminded the Sailors to maintain a global presence, forward projection and to be neighbors with other continents and other countries to connect and create better partnerships and better understanding among our nations.