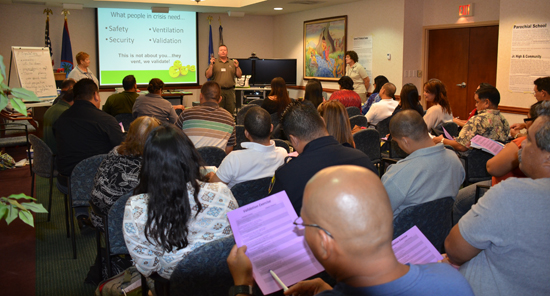 Guam – The U.S. Attorney’s Office for the Districts of Guam and the Northern  Mariana Islands sponsored a day and a half training workshop in Guam on September 28‐29, 2012, entitled, “Responding to K‐12 Schools in Crisis:   What you Need to Know.” Participants developed practical strategies for addressing the needs of students and staff during times of crisis.

The workshop also included training on “Creating and Sustaining a Local Crisis Response Team”, which is designed to provide a template of tested
protocols for managing school crisis events. Helping educators address their own emotional responses was also included.

The training supports the goal of Project Safe Neighborhoods, a Department of Justice initiative announced in 2001, to combat gang and gun
violence by promoting coordination among federal, state and local agencies to make our communities safer.

“The U.S. Attorney’s Office expresses our sincere appreciation to the trainers and to all of the participants who attended this very important training
opportunity as part of the Department of Justice’s Project Safe Neighborhood Initiative, to learn more about what we can do, as a community, to protect and be responsive to the needs of our children and families during a time of crisis whether it be a school shooting, a hate crime or other violence erupting on campus, a kidnaping or child exploitation crime, a suicide by a student, or even a natural disaster affecting our entire community,” said U.S. Attorney Alicia Limtiaco.

“It is during these times of crises that we must come together, as a community, to respond and help one another, as not one person nor one
organization can do it alone. It is during these time of crises when we are most challenged and tested ‐‐ physically, emotionally and mentally.  And thus, it is critical that we take the time to plan BEFORE any crisis occurs, and PRACTICE our plan as practice ‐ practice and more practice, is just as important as the plan itself,” stated U.S. Attorney Limtiaco.

The workshop was held at the U.S. Attorney’s Office Main Conference Room at the Sirena Plaza.  Particpants included principals, teachers and
counselors from Guam’s public schools and DoDEA schools, as well as officers from the Guam Police Department and Guam Customs and Quarantine Agency, and representatives from the Governor’s Office, Guam Homeland Security and Guam Community College.