READ the release from the BEA in FULL with charts below:

HAGATNA, GUAM – (December 5, 2013) – Today, the Bureau of Economic Analysis (BEA) is releasing estimates of gross domestic product (GDP) for Guam for 2011 and 2012, in addition to estimates of gross domestic product by industry and compensation by industry for 2011.* These estimates were developed under the Statistical Improvement Program funded by the Office of Insular Affairs (OIA) of the U.S. Department of the Interior. The release of the 2012 statistics reflects a one-year acceleration in the availability of the GDP estimates for Guam.

The latest estimates for 2005 to 2010 for GDP, GDP by industry, and compensation by industry are also presented in this release.

In 2012, the increase in real GDP reflected an improvement in the trade balance that was partly offset by decreases in government spending. Exports of services, which consists primarily of spending by tourists, contributed significantly to economic growth. Both federal and territorial government spending detracted from growth, as government construction activity fell and compensation of employees decreased.

Gross Domestic Product by Industry and Compensation by Industry for 2011
The estimates of GDP by industry for Guam show that the private sector was the source of the decrease in real GDP in 2011 (see Table 2.5). The largest contributor to the decline was the construction sector.

[*1 These estimates are based on limited source data and are subject to revision.]
[* 2 In this news release, “government spending” refers to “government consumption expenditures and gross investment.”]

The government sector, which includes the territorial government and the federal government, increased. This increase reflected growth in compensation
of government employees.

Revisions to GDP
Estimates for 2008 to 2010 that were released on September 24, 2012 have be en revised in order to incorporate improvements to source data; these improvements include the following:

The pattern of growth in the revised estimates is similar to that of the previously published estimates (see Table 1.7).

Future directions
Moving forward, an agreement between OIA and BEA will extend and improve the estimates of GDP for Guam. The information provided by the Guam Government will continue to be critical to the
successful production of these estimates.

The Bureau of Economic Analysis provides this service to you at no charge. Visit us on the Web at www.bea.gov.

All you will need is your e-mail address. If you have questions or need assistance, please e-mail subscribe@bea.gov. 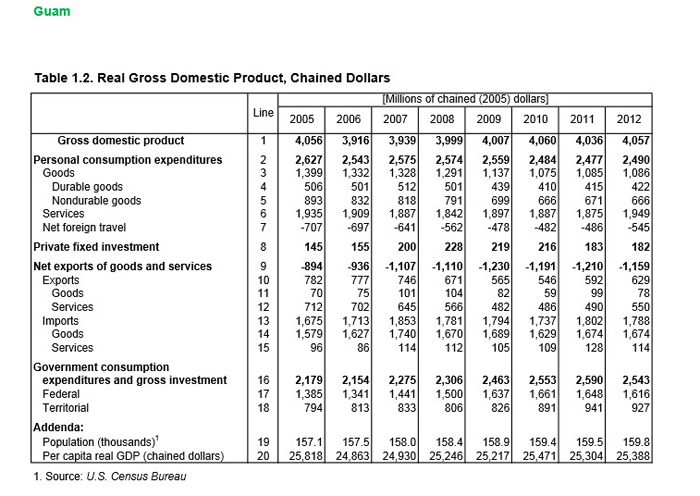 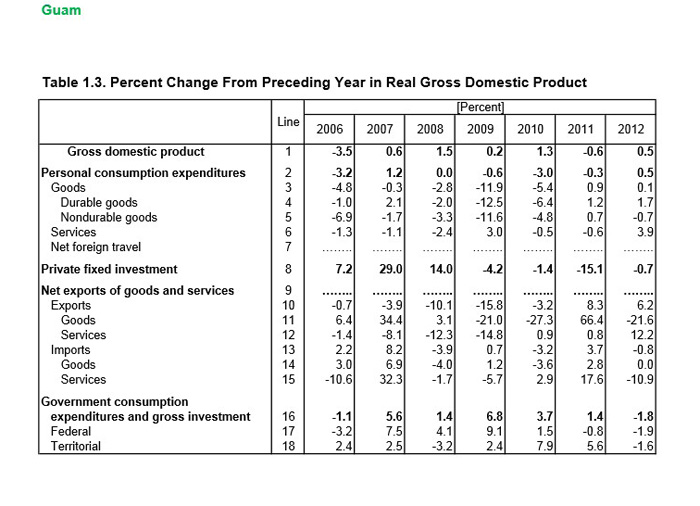 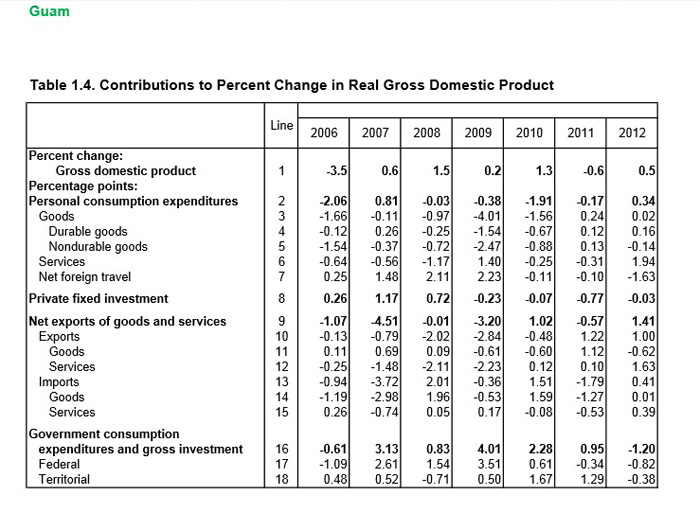 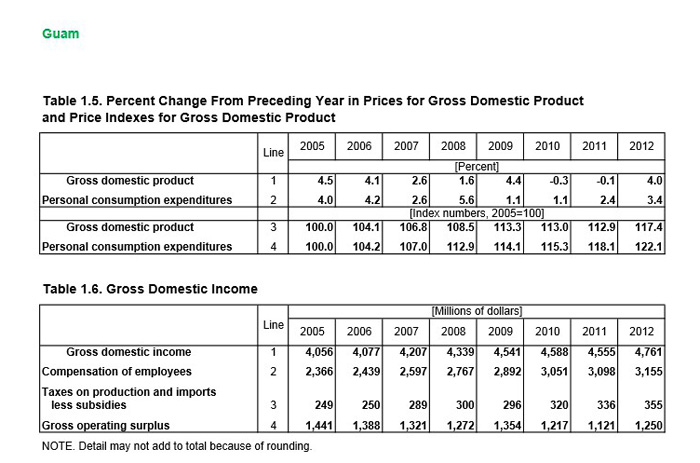 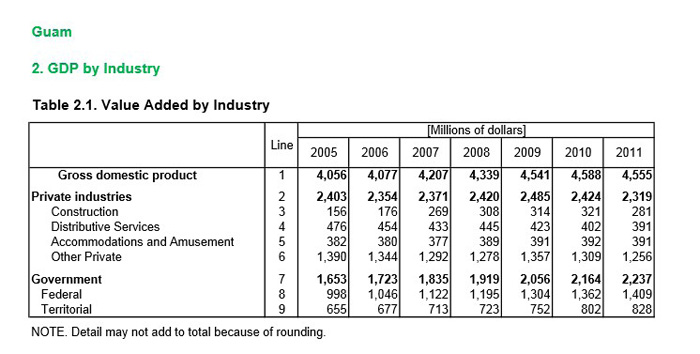 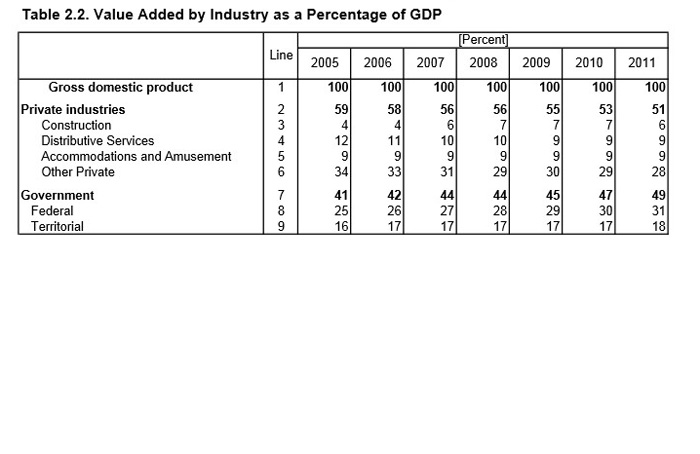 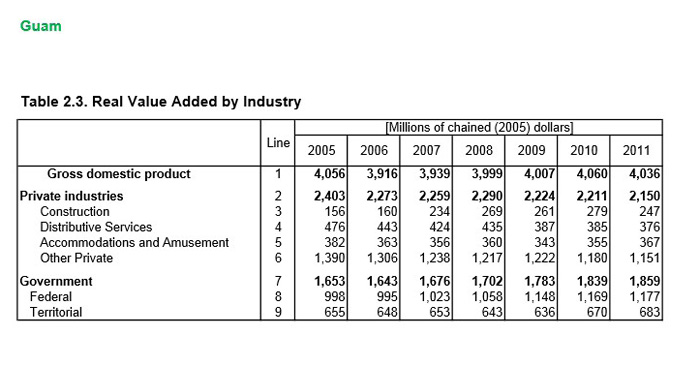 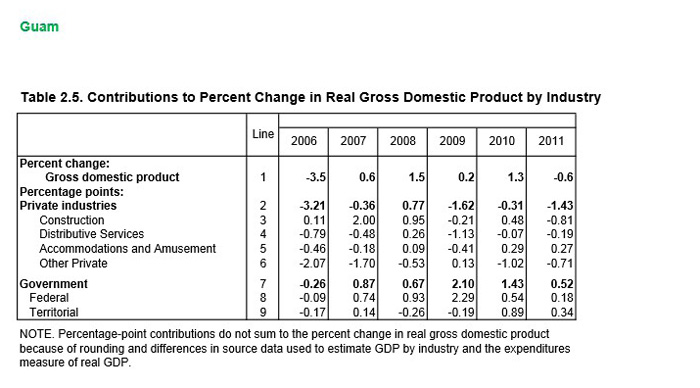