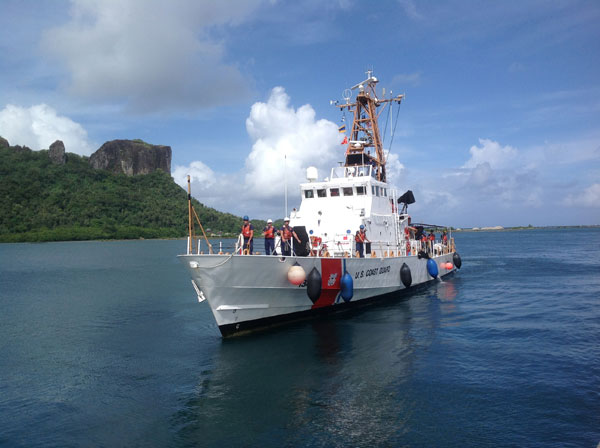 Coast Guard cutters Assateague and Sequoia recently returned to Apra Harbor, Guam, after each cutter completed patrols as part of Operation Rai Balang, a regional fisheries operation between the United States, Federated States of Micronesia, Republic of Palau and Republic of Marshall Islands. The cutters combined transited more than 7,500 nautical miles over 40 days at sea through the Commonwealth of Northern Marianas Island’s exclusive economic zone and surrounding high seas.

Shipriders from the Federated States of Micronesia maritime police sailed aboard the cutters to lead joint boardings and assisted Coast Guard crewmembers with ensuring compliance of all applicable laws within the respective exclusive economic zones.

Sequoia began their deployment by heading north to patrol the 200 nautical mile border of the Commonwealth of Northern Marianas Island’s exclusive economic zone and surrounding high seas. After approximately two weeks, the cutter returned to homeport for fuel and supplies before beginning the transit southwest of Guam to monitor fishing activities in the western Federated States of Micronesia’s exclusive economic zone near Yap. Sequoia’s law enforcement personnel conducted several boardings over the course of the patrol, ensuring compliance with fisheries regulations.

Less than a week later, Assateague left for their patrol and transited east of Guam into the high seas to begin regional fisheries enforcement. Similar to Sequoia’s patrol, the crew conducted several boardings of foreign-flagged fishing vessels ensuring compliance pursuant to specific maritime laws and regulations.

“The crew was able to maximize our resources, capabilities and effectiveness to carry out bilateral law enforcement efforts during the operation,” said Lt. Jared Silverman, commanding officer of Assateague. “I commend them and all our partnering units for their outstanding interoperability and furthermore contributing to the maritime surveillance coordination here in the Pacific.”

The Coast Guard performs the maritime fisheries patrols under bilateral agreements with several Pacific Island nations. In what is known as a shiprider agreement, the service is able to engage in joint maritime surveillance operations where a visiting law enforcement officer rides aboard a Coast Guard vessel or aircraft. The partnership enables the Coast Guard to exercise additional authorities on behalf of the host nation and provides increased law enforcement capabilities to the host nation. Overall, these joint efforts encompass the importance the continued multi-national surveillance operations in the Pacific. With the fishing capacity increasing steadily through the years, it has been essential to have effective management and surveillance operations to avoid the over-fishing of highly migratory fish stocks within the region.

“I believe I speak for all of them by saying that it is a humbling experience to be able to assist in the sustainability of the region’s fisheries resources that are truly essential to the people of the pacific,” said Silverman.