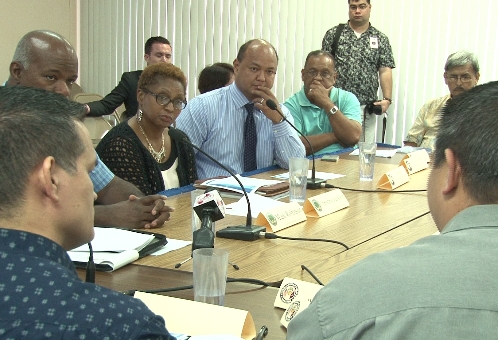 Lawmakers held a round table meeting with the visiting U.S. Department of Education officials to find out how GDOE is doing on their transition to get off high-risk grantee status.

Guam – The visiting US Department of Education officials faced lawmakers this morning for a round table meeting and told them that GDOE is on its way to implementing a solid plan to get rid off their high-risk grantee status.

According to them, although GDOE is only in the implementation stage, they’re on the right track to reaching transition and they explain with the right plan and people in place, it looks as if GDOE has a better chance at reaching their goal than ever before.
US DOE Representative Christine Jackson says, “There is a plan in place right now. It’s not just the Corrective Action Plan but it is an implementation stage to get to transition, transitioning from the third party to GDOE taking on its functions. We keep getting the question ‘how long is it going to take’ but we don’t have that answer. It’s really up to GDOE. It’s going to take the organization, with the momentum right now, continuing to move forward.”
The US DOE officials are just concerned about one thing: stability. They say it’s not just about completing projects, it’s about sustaining them as well. Jackson cautions GDOE to take their time before asking US DOE to reconsider their high-risk status. She says, “I caution you because I’ve been in this for 11 years, don’t rush it. This is the time to take the time to make sure everything is set. It’s like pouring concrete cement. If it’s not set and you start walking on it, it’s not pretty. Let it settle. These SOPs have to be implemented properly and thoroughly, make sure they’re working, amend them, re-do them, otherwise we’ll be back at the same stage all over again. We don’t want counter-production at this point. You have invested too much of your local money to continue with the third party unnecessarily because you rushed to get rid of them.”
What exactly is GDOE’s goal? Jackson says, “I’m ready to have our high-risk designation reconsidered. I’m ready for you, OIG, GAO, bring everybody here to validate that we no longer need a third party fiduciary. We can do this on our own. At that point, that’s your to be future state because there’s no set date. We cannot set that date.”
For about 5 years, under the special conditions placed on GDOE, $3 million dollars goes to the third party fiduciary agent. Lawmakers asked if there is a way to slowly phase out the third party to save taxpayers dollars.
Senator Nerissa Underwood says, “This third party fiduciary agent is in a way a blessing in disguise to give us the opportunity to improve our accountability for the funds that our taxpayers are giving us. Will there be a point is there a way we’ve reached this point we no longer need you or a plan to gradually…we just need them for part of the time is that okay.”
According to the fiduciary agent, they’ve downsized over the years. Alvarez & Marsal Fiduciary Agent Managing Director Bill Roberti says, “The Speaker originally asked can you sift this down, we have. Initially we’re at $4.2-$4.4 million in the first two years. The last couple years 3.1 to 3.2 The new contract that was just approved is $3 million.”
However, Jackson reminds lawmakers to extend the contract for the third party because it will be ending next year just to make sure that the federal funds keep flowing. GDOE Superintendent Jon Fernandez attributes the accomplishment so far to his staff. He says, “As a department, that’s what I rely on for success that our employees are showing we’re all one department, we own this problem of ours and we’re going to fix it ourselves and we’re getting close. I ask that they continue to be supported in that direction.”