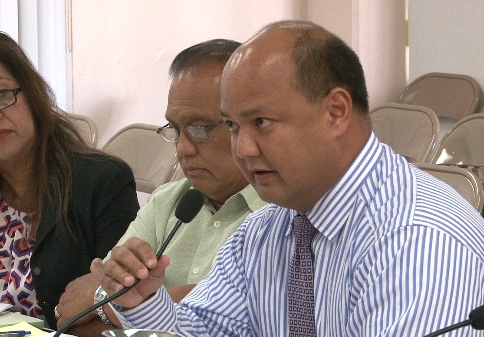 The Department of Education Superintendent is back from his trip to DC and he has a couple updates for stakeholders.

First is an update on getting the department off high-risk grantee status and second what happened at the meeting with the U.S. Department of Administration when he asked for a higher reimbursement rate for food services.

Superintendent Jon Fernandez says after presenting the transition plan for getting DOE off high-risk to US DOE officials, a few changes have to be made.
He says, “They were very favorable. It was a very positive meeting. They’ve acknowledged the fact that we have two clean audits under our belt, which is major progress for the department, much improved from where we were 10 to 15 years ago. They’ve acknowledged that our conversation about transition have been transparent and created a system of accountability. They’re on the same page, we’ve taken their input, we’re going back to adjust our transition planning because I think a lot of their input was based on ‘be careful that you’re not just completing activities but are able to sustain these improvements over time.”
What exactly is DOE’s transition plan?
Fernandez says, “To walk us from where we are today to where we need to be to complete our corrective action plans. We’ve identified the critical steps we need to take place and the time frame for those milestones to be reached. We’ve assigned particular individuals to get those tasks done and we’ve worked in making sure that plan was a solid plan, something realistic,  and we can hold ourselves accountable for.”
Fernandez says instead of US DOE officials coming by this summer, they delayed their visit until November to access DOE’s progress. Meanwhile, he says the department also has more work to do if they want more reimbursements from USDA for the breakfast and lunch programs. Fernandez says right now, the department receives about $11 million dollars but the total costs of this program actually reach $15 million.
He says, “For the first time in our department history, we’re looking for a higher reimbursement similar to either Alaska or Hawaii.”
Fernandez provided the USDA with a cost study of food services, but they needed more financial information. He says, “We met as a team with UOG and our internal staff to look at the request for more information, identify people who will be responsible for getting that information and setting out a time frame from getting a response to USDA.”
Fernandez says they’ll be sending off a draft response to USDA by early August and he hopes to finalize the report by September.