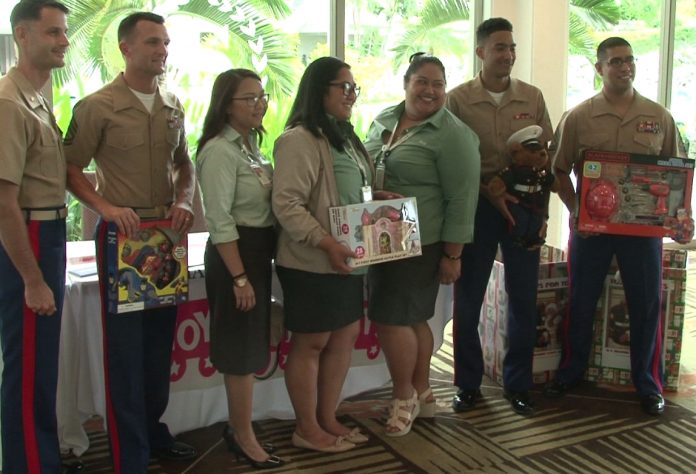 Guam – Today is Giving Tuesday, the one time of the year dedicated to making a considerable donation to a charity of your choice, but if you’re still undecided on where to donate this year, why not consider the united states marines annual toys for tots drive?

The charity toy drive that began in 1947 with just one US Marine and his wife eventually emerged into the full-fledged toy drive that serves over 500 million toys to children worldwide.

US Marine Major Chris Merrill spoke to the Rotary Club of Tumon Bay in conjunction with the Giving Tuesday holiday.

According to the Major, the popularity of the toy drive has truly grown over the years.

“Last year, we had so many toys that we were actually able to help the children on the island of Tinian. And it was through the generous donation of Micronesia Air Cargo Services that we were able to lift those toys over and Guam Chamber helped make that happen and then deliver the toys on Tinian too,” he said.

Major Merrill says there are many ways businesses can think outside the box with donations, such as sponsoring competitive high school challenges or asking employers to match donations made by employees.

This year, Major Merrill says over 40 businesses are signed up for the charity, as well as every single high school on Guam, which is around 12,000 students.

He also says the generosity has provided at least 2 million children with a Christmas gift every year in the last few years.

If you’re interested in donating, Major Merrill has a few suggestions to adhere by.

“So how do we do toy collections? Is it just boxes? Is it just businesses? I would tell you, no. In fact, some of the most successful ways and some of the most creative ways we collect is through folks like you. So what can you do to help? Simply, you can bring a new unwrapped toy–or several. So you wanna drop off boxes and maybe you can add your business to the list. I would encourage you to make sure you remember the teens, everyone thinks of dolls and match box cars and teddy bears, but the teens, the soon-to-be young adults–they need Christmas too. So please remember them,” he said.

The drive will last until Friday, December 16 and for more information on Toys for Tots, you can call Guam Chamber of Commerce at 472-6311.