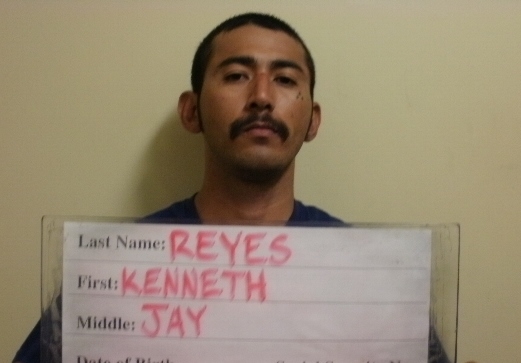 The Fugitive Task Force chased Kenneth Jay Reyes from Barrigada all the way up to Dededo.

Guam – Residents of Barrigada and Dededo woke up to sounds of a high speed chase and some gun shots this morning.

US Marshals with the Fugitive Task Force were involved in the apprehension of a suspect later identified as 31-year-old Kenneth Jay Reyes, wanted on an arrest warrant. US Marshal Frank Leon Guerrero tells PNC that the suspect was wanted by local officials but one of his deputy marshals spotted him this morning along the Route 1 and Route 8 intersections.

The Fugitive Task Force gave chase but the suspect, driving in pickup truck, continued to elude police officers. Leon Guerrero says US Marshals cornered him into the Barrigada Heights area and while there “something happened that was perceived as a threat. One of the US marshals fired at the pickup truck because he felt threatened.”

Leon Guerrero says that the round struck a tire but the suspect continued to flee. He made his way to the Harmon Loop Road area, then into the Salisbury Street in Dededo on a blown out tire before spinning out and crashing the truck into a parked car in front of a residence.

Leon Guerrero notes that three vehicles sustained damages during the pursuit, a US marshal vehicle, the parked car and another vehicle along Harmon Loop Road that was forced off the roadway.

Leon Guerrero says Reyes was relinquished to the Superior Court of Guam.