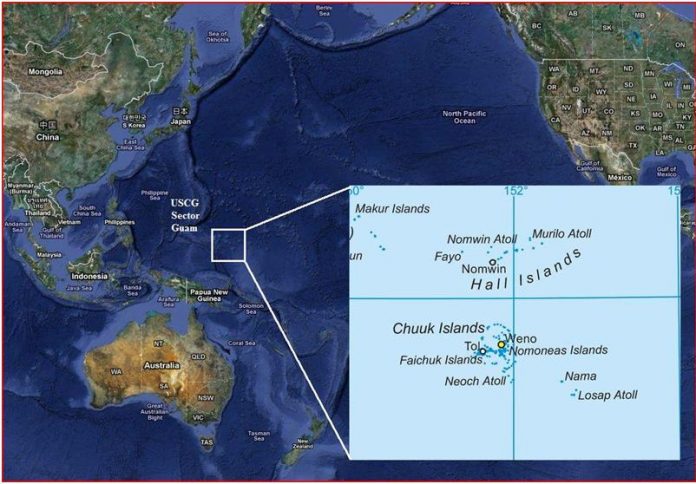 Guam –  15 people aboard a missing 28-foot skiff  have been found alive an well on the uninhabited island of  Fanano in the Federated States of Micronesia.

Photo’s taken by a Navy P-3 Orion show the 6 children and 9 men linking hands on the beach to spell out  “S.O.S.” as the long range search aircraft flew over Friday.

The atoll of Fanano is part of the Murilo Atoll, which comprises a small portion of the Federation States of Micronesia.

A vessel passing by Fanano on Thursday first reported seeing people and a boat on the beach of the island matching the description of the skiff  that was last seen leaving the Chuuk lagoon Monday.

The six children and nine adults were found alive and reportedly in good condition with food. The group consisted of 10 males and five females, ages ranging between four and 59 years old.

READ the USCG release in FULL below:

Editor’s note: click each image above for high resolution versions.

Apra Harbor, GUAM – The 28-foot skiff with 15 passengers, missing since Wednesday [MONDAY], has been located on the beach of an uninhabited island in the Federated States of Micronesia, Thursday.

Watchstanders at Sector Guam received a report Thursday afternoon that a vessel matching the description of the missing white 28-foot skiff with 15 passengers was found. A vessel leaving Ruo Island, the intended destination of the missing skiff and also in FSM, saw the vessel marooned and overturned. According to the report several people were also on shore.

The six children and nine adults were found alive and reportedly in good condition with food. The group consisted of 10 males and five females, ages ranging between four and 59 years old.

Search assets combed an area approximately 18,642 miles over a period of 76.5 hours.

The crew aboard Coast Guard Cutter Assateague traveled 550 miles from Guam to reach the stranded survivors, and is scheduled to assist them back to Ruo or Weno in FSM.

Sector Guam personnel used the Automated Mutual Assistance Vessel Rescue system to identify commercial vessels in the area that could assist with the search. The crews aboard the motor vessels Höegh Asia, a Norwegian cargo ship and Southern Explorer a Panamanian ship, both participating members of the AMVER program, responded to the request for assistance.

Another good Samaritan vessel on its way to Guam, the motor vessel Islander, assisted in the search, as well as local fishermen across the region.

“U.S. Coast Guard Sector Guam did not conduct this successful search alone,” said Capt. Thomas Sparks, commander of Sector Guam. “A search of this magnitude would not have been possible without the support of U.S. Coast Guard District 14, Coast Guard Air Station Barbers Point, the U.S. Navy, and Captain Thomas Narruhn from the Chuuk Department of Transportation. However, I am most grateful to Bruce Best from PEACESAT. He is the real hero in this case.”

Sparks added, “Without Bruce Best and his proficient use of the PEACESAT program, a long range communications network based in Guam that provides emergency information to islands without telephones or other means of communication, the boat that spotted the skiff would probably not have known to be on the lookout for it. Moreover, timely communication with these islands to confirm the status of the passengers on board this missing skiff would not have been possible.”

Boaters are strongly encouraged to file a float plan, have basic lifesaving gear on board such as personal floatation devices, and have a means of communications sufficient for the voyage that is being undertaken.  For safety equipment requirements based on the size and type of vessel, visit: http://www.uscgboating.org/.

Click here to see a map of the search area.