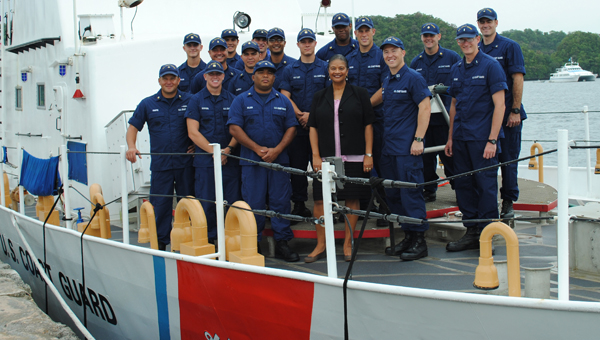 This Coast Guard Foundation award is presented to the unit within the Pacific Area that, by its overall achievement, best demonstrated a commitment to excellence and professionalism embodied in the traditions and lore of the U.S. Coast Guard.

Washington received this prestigious award for numerous accomplishments achieved during 2013. The ship served as the Coast Guard’s only long-range asset in Guam for the first four months of the year, overcoming countless obstacles to maintain a constant state of high readiness. During one exceptional 24 day period in January, the ship’s crew conducted 20 law enforcement boardings, executed two escorts, served as On-Scene Commander for a Search and Rescue Exercise with local partners, conducted two rescue missions, and went out twice on the same day into seas of 20 plus feet.

Throughout the course of the year, the crew assisted in saving a total of 23 lives while executing six search and rescue cases, including a heavy weather medical evacuation and a rescue of 10 mariners from a capsized sailing canoe in a joint effort with a merchant vessel. Washington also conducted 104 Law Enforcement (LE) boardings and participated in Operation RAI BALANG, a multi-national law enforcement initiative held annually in the Pacific.

In their effort to build strong partnerships with other Pacific Island nations, the ship’s crew led two days of LE capacity building in Palau, hosted two U.S. Ambassadors, taught boating safety courses on Ulithi Atoll, Federated States of Micronesia, and made humanitarian deliveries to several remote islands. Despite this fast pace, the crew kept the ship in top condition. As a result, the ship went the entire year without requiring any unscheduled down time for repairs.

Washington is one of two 110-foot island class patrol boats assigned to U.S. Coast Guard Sector Guam to patrol the waters of Guam, the Commonwealth of the Northern Mariana Islands, the Republic of Palau, and the FSM. These ships are responsible for executing search and rescue, law enforcement, and homeland security missions within a patrol area roughly the size of the continental United States.