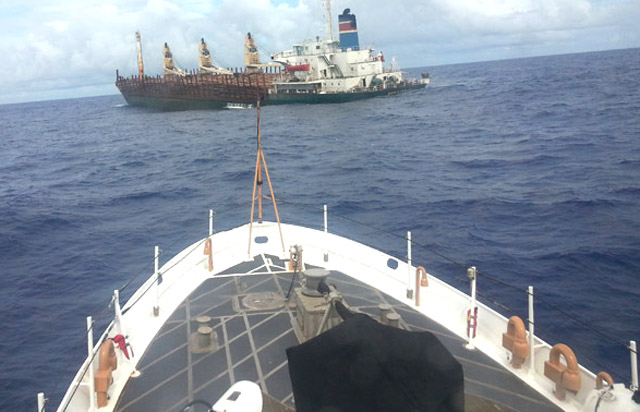 APRA HARBOR, Guam — Crewmembers at Coast Guard Sector Guam are assisting 24 crewmembers who abandoned the 500-foot cargo ship “Rich Forest” after the engine room flooded, Monday. The AMVER Vessel C.S. Sunshine rescued of all survivors from life rafts and safely brought them aboard without incident.

The 24 survivors were safely transferred from the C.S. Sunshine to the Coast Guard Cutter Sequoia, Wednesday.

C.S. Sunshine has been released from the case and will continue its voyage to Japan.

The Sequoia and the Coast Guard Cutter Assateague conducted a final visual assessment of the “Rich Forest”, before departing for the islands of Saipan, Common Wealth of Northern Mariana Islands and Guam.

The Sequoia is expected to arrive in Saipan Friday where the survivors will be met by Department of Homeland Security Investigations for processing and the Assateague will make its way back to its homeport of Guam.

The Rich Forest is reported to be riding low at the stern, but still afloat and the owner has continued to pursue options for salvaging the vessel.

At 8 a.m. Sunday, watchstanders at the Sector Guam Command Center received report of flooding from the Rich Forest.

The ship, carrying logs enroute to China, experienced flooding in the engine room and subsequent loss of propulsion. The Chinese crew reported the vessel was taking on 160 tons of water per hour and generators had failed.

The Coast Guard Cutters Assateague and Sequoia were deployed from Guam but were 18 hours away.

AMVER, sponsored by the United States Coast Guard, is a unique, computer-based, and voluntary global ship reporting system used worldwide by search and rescue authorities to arrange for assistance to persons in distress at sea. With AMVER, rescue coordinators can identify participating ships in the area of distress and divert the best-suited ship or ships to respond. Prior to sailing, participating ships send a sail plan to the AMVER computer center. Vessels then report every 48 hours until arriving at their port of call. This data is able to project the position of each ship at any point during its voyage. In an emergency, any rescue coordination center can request this data to determine the relative position of AMVER ships near the distress location. On any given day there are over 3,700 ships available to carry out search and rescue services.