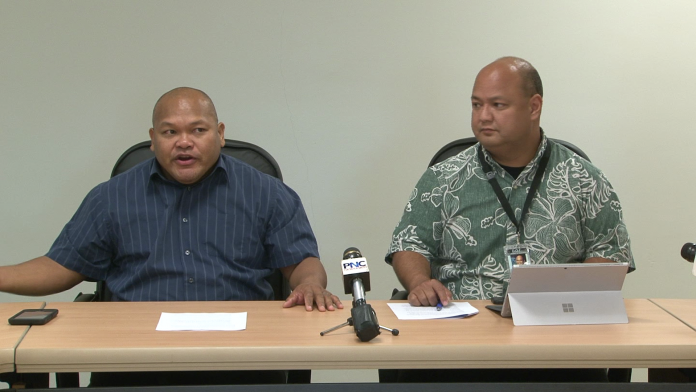 Guam – Students, parents, teachers and school administrators, you can heave a sigh of relief. The Guam Department of Education will not be delaying the start of the school year, furloughs are not on the table and schools will not be closed or consolidated–at least for now.

And if budgetary cuts still linger in three weeks’ time, GDOE officials say they will apply even more pressure on the legislature to find funds for the department.

As the summer comes to an end and a new school year begins, questions still remain about the Guam Department of Education’s future. Deep cuts within the department were once a regular discussion but the threats dissipated when a funding source was identified. Now that the funding source is gone and millions in cuts once again loom, stakeholders are once again on edge.

But at a press conference today called upon by GDOE officials, it was made clear, jobs and schools are not on the line.

“We still plan to open schools on time this year. We still plan to run 41 schools, serving all the children that are coming to our doorsteps. The start of class is August 14, 2018,” said GDOE Superintendent Jon Fernandez.

“I’m not gonna prioritize putting our staff and our employees on the fear watch that they may not have a job. I understand the reality of it, but at this point in time we got a job to do, we got a mission and the legislature needs to provide a solution. They took that solution away from us. Now give us an other solution,” added Guam Education Board Chairman Mark Mendiola.

GDOE’s future with an uncertain budget was just one of other topics discussed at today’s press conference. The reason the media was invited out today was to update the community on talks GDOE recently had with the U.S. Department of Education regarding Guam’s designation as a high risk auditee and the lifting of special conditions on the department.

Unfortunately, administrators left the meeting empty handed. Despite the significant progress GDOE has made in improving its handling of grant funding, USDOE will not be lifting the special conditions imposed on GDOE that’s cost GovGuam $21 million for the last seven years.

The reason? Because, apparently, it’s never been done before. Only two jurisdictions have ever been given special conditions—Guam and the U.S. Virgin Islands.

“They talk about us maybe being a model. Once we figure this out we’re gonna be a model for any other jurisdiction placed under special condition. Our message to them is that that’s not fair. Even though that maybe true, we can’t be held to a standard and be placed under this burden,” asserted Fernandez.

“It’s completely uncharted territory. So I think that’s why they’re having preliminary meetings. There really isn’t a standard operating procedure for what happens when somebody requests to get off of special conditions and what the timeframe is,” he noted, later adding, “What happens, sometimes, in these conversations at the staff level is that you say we’ve completed x, y, z, and sometimes they’ll say oh well you’ve completed that, but have you also done a, b and c? And we will come back and say well that’s not really in the list that you gave us.”

In fact, USDOE has not visited GDOE since 2015.

“They acknowledged that and I said how can you validate something when you haven’t been on the ground,” Mendiola pointed out.

“You can’t use this argument and say, well the government might be short of cash, how’s that gonna impact your–we say, look, that’s an extraneous factor. Every state has similar, will have similar situations. If they’re going through a budgetary crisis or they’re having elections, you can’t use these special factors to influence your decision about our special conditions,” added Fernandez.

The good news, according to Fernandez, is that USDOE has committed to reassessing GDOE’s progress in an expedited manner. GDOE will have about a month to update USDOE on its progress in managing the finances of its federal grants department.