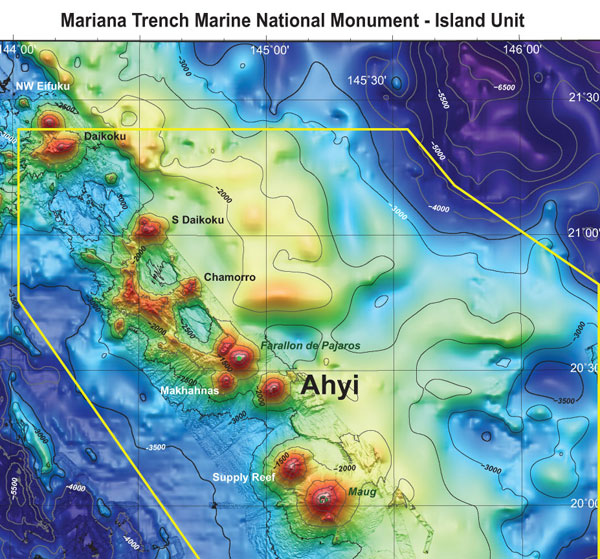 Guam – The USGS Hawaiian Volcano Observatory has been keeping a close eye on an undersea volcano in the CNMI which has been showing signs of activity in recent days.

According to a weekly summary, issued Friday by the Observatory, recent seismic signals “almost certainly herald an eruption”.  The report says that the most likely source of the volcanic activity is the Ahyi seamount, which is about 20 km southeast of Farallon de Pajaros.

READ the posting on the USGS website HERE, or read it below:

During the past week, we have been keeping a close watch on the Northern Mariana Islands (NMI), as seismometers on the islands record high levels of seismicity from an undersea volcano near the island of Farallon de Pajaros.

The seismic signals almost certainly herald an eruption. In fact, submarine explosions were heard by scuba divers who are conducting coral reef research in the area. The divers even felt the shock waves from the explosions, and one of the most powerful ones reverberated through the hull of the NOAA base ship, Hiʻialakai, leading the crew to think something had happened to the ship. Shipboard personnel also reported a large sulfur slick on the southeast coastline of Farallon de Pajaros.

Unfortunately, the ship had to leave the area under threat of an advancing typhoon. If they can get back to the vicinity soon, they may be able to investigate the source of the explosions with great caution, keeping in close contact with U.S. Geological Survey (USGS) and CNMI emergency management personnel, who are monitoring the seismicity.

The CNMI emergency management office and the volcano observatories of the USGS have been working together for over 30 years to establish volcano monitoring networks and assess volcanic hazards in the Mariana Islands. 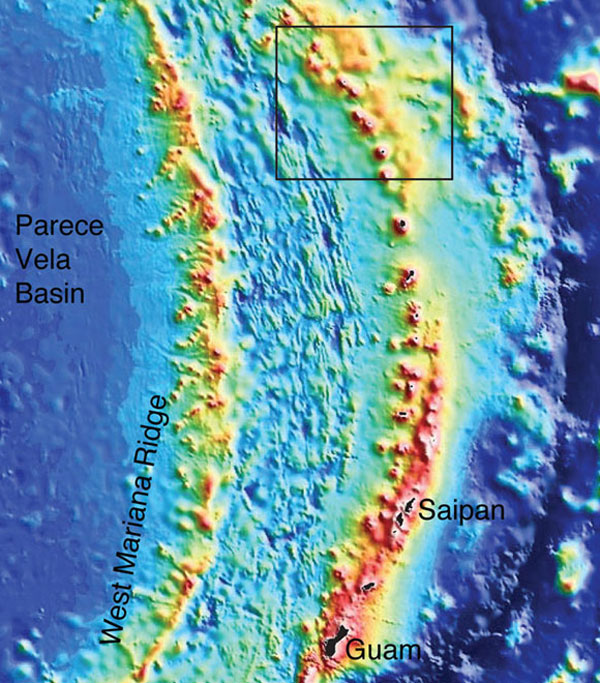 The most likely source of the current activity is Ahyi seamount, about 20 km southeast of Farallon de Pajaros. Ahyi rises to within 64 m (210 ft) of the ocean surface and is associated with several reports of possible eruptions in historical times, the most recent in 2001.

Interspersed among the volcanoes that rise above sea level to form the NMI are many submarine volcanoes. Together, the islands and submarine volcanoes form the Mariana arc, a classic example of an island arc. These arcs, such as the Aleutians and the Japanese archipelago, are formed at subduction zones—boundaries where one tectonic plate plunges beneath another.

Reports of discolored water throughout the Mariana arc are common, indicating that the NMI may experience frequent submarine eruptions. A dramatic, recent example is the 2010 eruption of South Sarigan seamount, which sent an eruption plume up to 12 km (40,000 ft) above sea level.

The plume intersected many commercial air traffic routes, raising concern that the abrasive ash fragments could damage aircraft or even stall their engines. In addition, the eruption posed a potential hazard to ocean-going vessels, as it produced a large area of discolored water, possibly including a raft of pumice—a type of rock that can be produced in explosive volcanic eruptions. A recent submarine eruption of Havre seamount north of New Zealand in 2012 created a 20,000 square-kilometer (7,700 sq-mi) raft of pumice—about twice the area of the island of Hawaiʻi!—that eventually spread to about 4 million square-kilometers (1.5 million sq-mi) as it broke up.

Pumice can float because it’s basically a type of foam—filled with gas bubbles encased in quickly cooled lava—which makes it less dense than the ocean water.

It’s possible, but not certain, that the current unrest near Ahyi seamount will escalate into a vigorous eruption, with the creation of pumice rafts, and even an explosive eruption column rising above sea level. If this happens, there are further possible threats of local disturbances of the water column that could result in local tsunami and ash fallout from the eruption plume.

Long-time readers of this column may be wondering about the possible outcomes of the seismic unrest that we sometimes report on from our own submarine volcano, Lōʻihi, off the south coast of Hawaiʻi Island. The most recent confirmed eruption there, in 1996, created a large collapse pit at the summit. Deposits formed during that eruption and numerous previous eruptions, sampled by submersible vehicles, attest to frequent episodes of explosive volcanism at Lōʻihi.

While there is no doubt that Lōʻihi is a very active volcano, the pressure of the approximately 1,000 m (3,300 ft) of water between the top of the volcano and the surface makes it highly unlikely that even the most vigorous of eruptions of Lōʻihi will have significant impact at the ocean surface during our lifetimes.