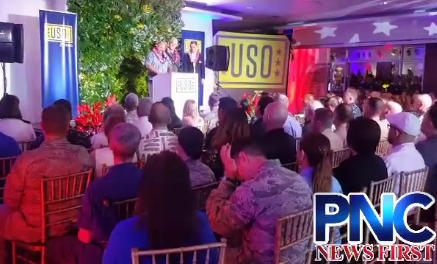 USO thanks the community for all the contributions made to strengthen service members and their families by helping them connect with family, home, and country through the USO.

Guam – The USO is celebrating 75 years of unwavering dedication to our nation’s heroes.

For their 75th anniversary, USO celebrated with a ceremony, entertainment, a fiesta, and an open house. Also to commemorate the event, Acting Governor Ray Tenorio signed a proclamation marking February 2016 as a special month for the USO. He thanks the USO for providing morale boosting entertainment, family strengthening programs, deployment support, and so much more. Joint Region Marianas Commander Bette Bolivar also thanks the USO for helping all the service members in Guam integrate into the island style community, get them acclimated into our beautiful island and for providing and home away from home.

Joint Region Marianas Commander Rear Admiral Bette Bolivar says, “In terms of family, for 75 years, the USO has supported millions of service members and their families worldwide. Since the moment Guam’s USO center opened its doors in 2006, they have taken care of so many service members. In 2015 alone, they welcomed and hosted almost 30,000 thousand service members and families so let’s give them a shout out for that.”

USO Pacific Regional Vice President Ret. Brigadier General Charles Hyde says, “To our distinguished guests, to everyone in Guam, to our communities, but most importantly for the men and women in the military, who we at the USO are dedicated to serving, thank you for helping us celebrate our 7th anniversary. It is an honor for me to be back from Guam.”